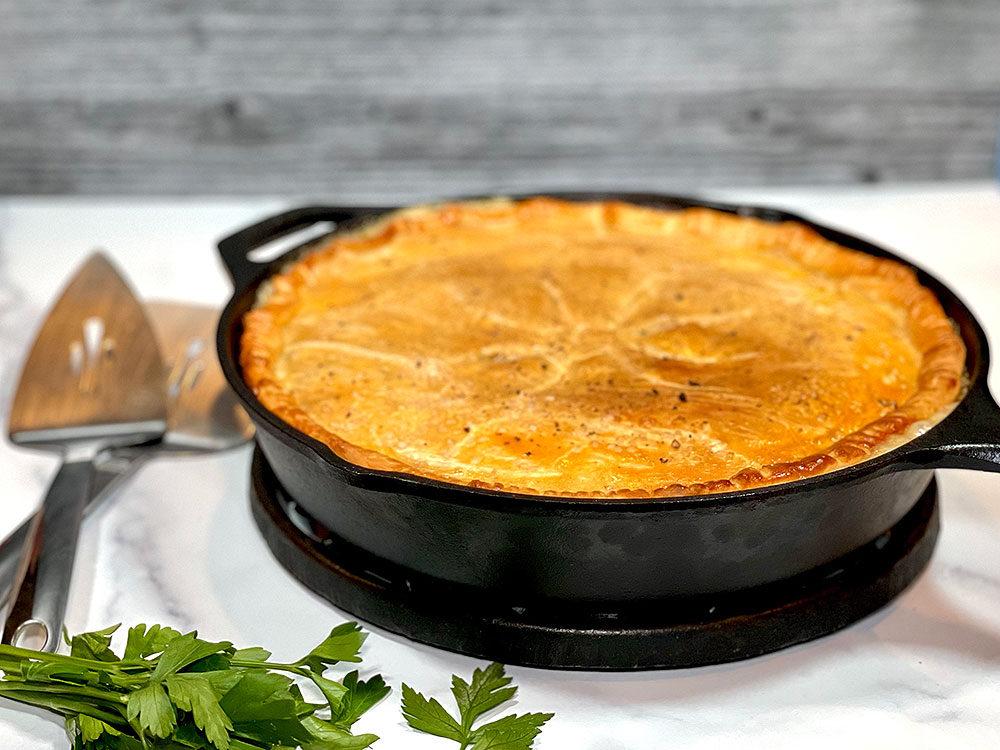 Chicken pot pie is one of my favorite dishes. But I rarely get a chance to eat it. The last time I ordered a chicken pot pie was at a restaurant in Colorado Springs. It was a revelation: the chicken had been cooked on a smoker. And I had a “Eureka!” moment then and there. I knew I could recreate this delectable dish at home.

I remembered that unique pot pie when I found myself with leftover chicken after a recent testing session of rotisserie chickens—namely, determining if the chicken’s position on the spit, i.e., how it’s skewered, affects the outcome. Take a look at my Battle of the Rotisserie Chicken post to see how it turned out.

There was just one thing standing in my way: making pie dough from scratch. Unlike my mother and two sisters, I somehow missed out on the baking gene. To allay my fears, they suggested using a prepared pie crust. Whew! Game on.

How I Made Chicken Pot Pie

I started by lighting a load of charcoal in a chimney starter in my Big Green Egg XL (BGE). I planned to have the pie ready to go by the time the BGE came up to 400 to 425 degrees. I added two wood chunks to create flavor-enhancing wood smoke. (Apple or another mild wood works well with chicken.) I selected the BGE for the chicken pot pie since it was a windy day in my neck of the woods and the outside temperature was only 5 degrees. An aside: The BGE is great for holding in heat, even in frigid weather.

But you can set up your charcoal or gas grill for indirect grilling to cook the pie. Please note than on cold days, you may have to add as much as 20 percent to the cooking time and replenish your fuel more often. 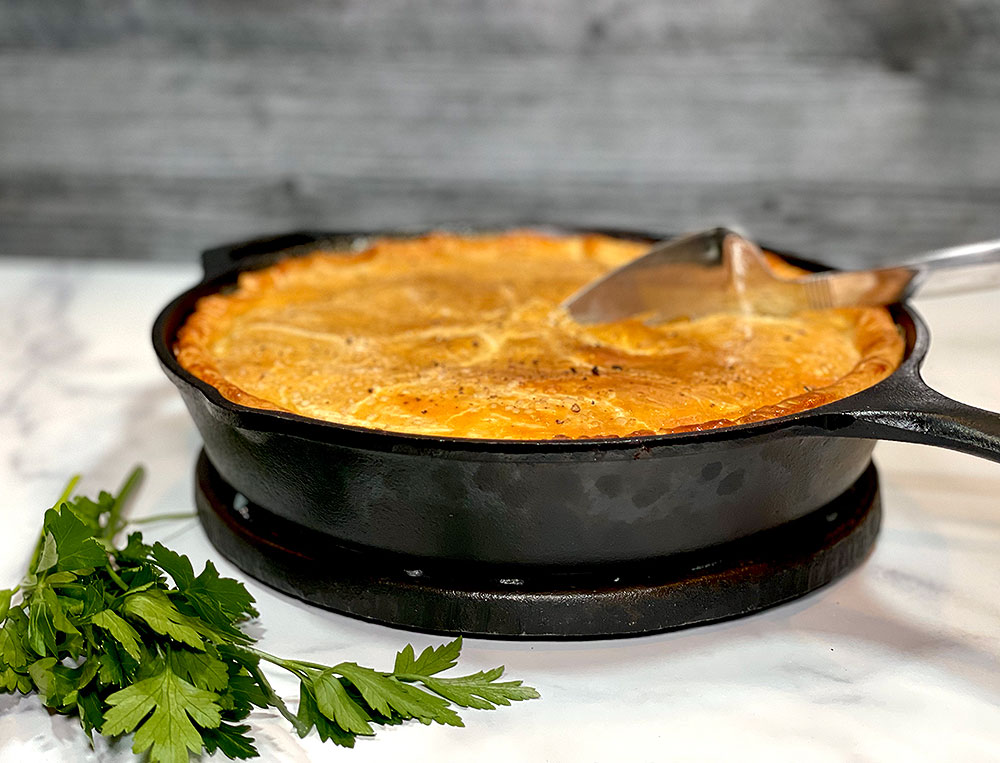 By the time I’d assembled my pie, the BGE was rarin’ to go. 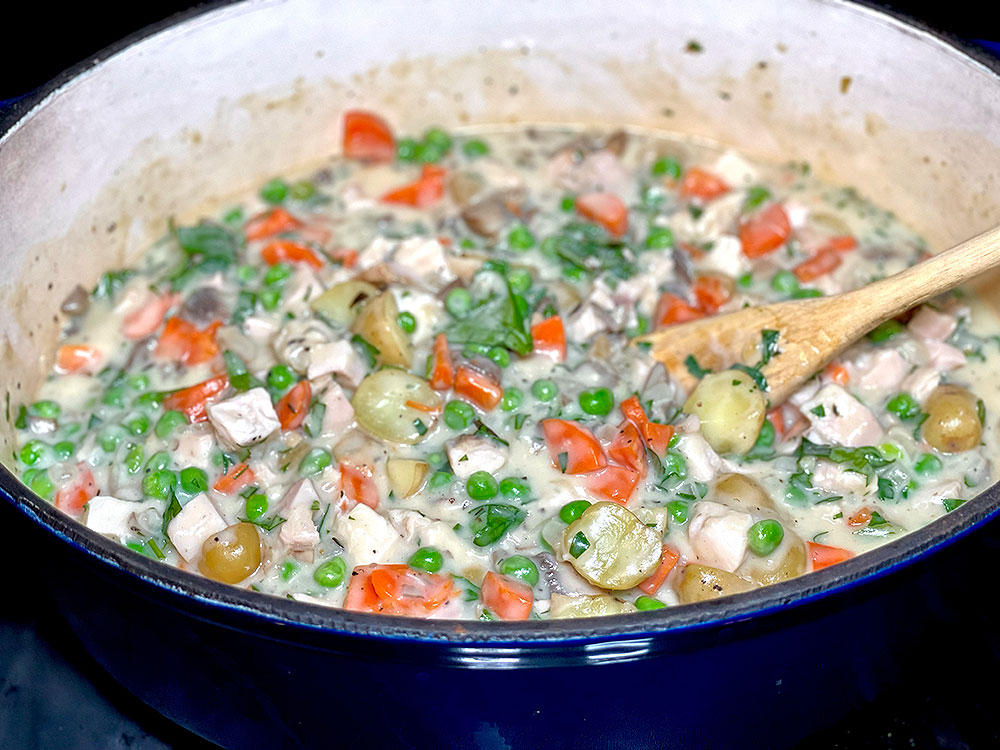 How did the pot pie—or should we call it “pit pie”?—turn out? Great! A definite winner. My wife and I loved the contrasting textures in each bite. First, there was the flakiness of the crust, followed by the creamy, savory, meaty filling. I especially enjoyed the smoky aroma and taste from the rotisserie chicken and the wood smoke created while smoke-roasting the pie. And while I think the store-bought pie crust was a success (and super-easy), I would attempt to make my own pie dough next time.

By the way, I made a bit more filling than what would fit into my 10-inch cast iron skillet, so I used the remaining filling and pie crusts (I’d bought two packages, just in case) to make another outstanding dish the following day—chicken pot pie empanadas.

Get my recipe for Twice-Smoked Chicken Pot Pie. 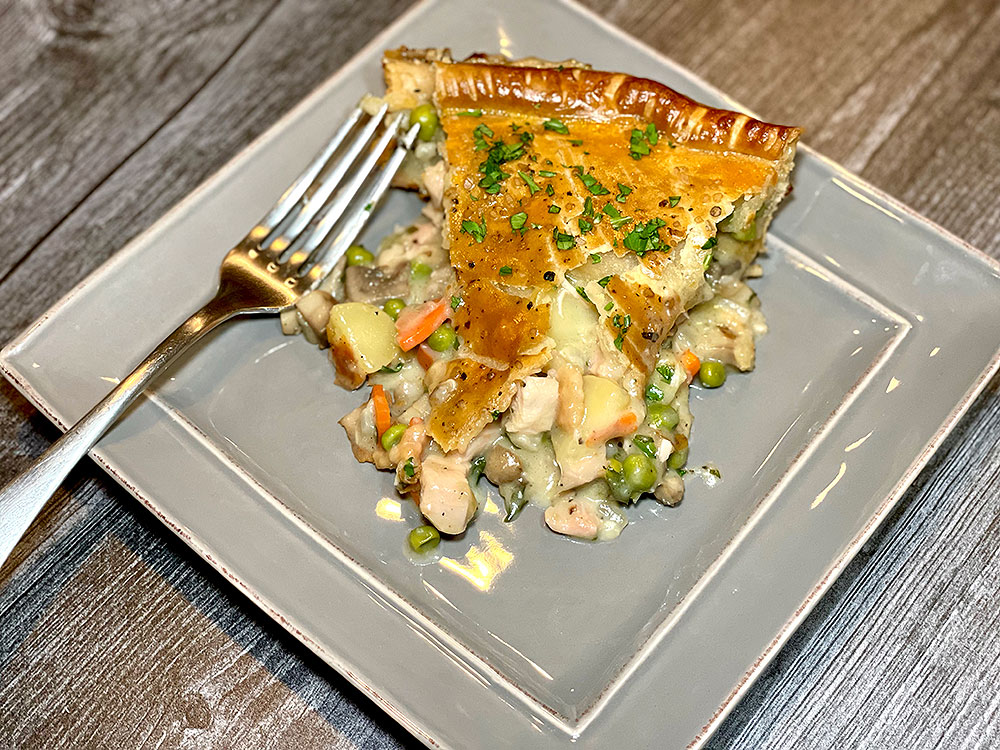