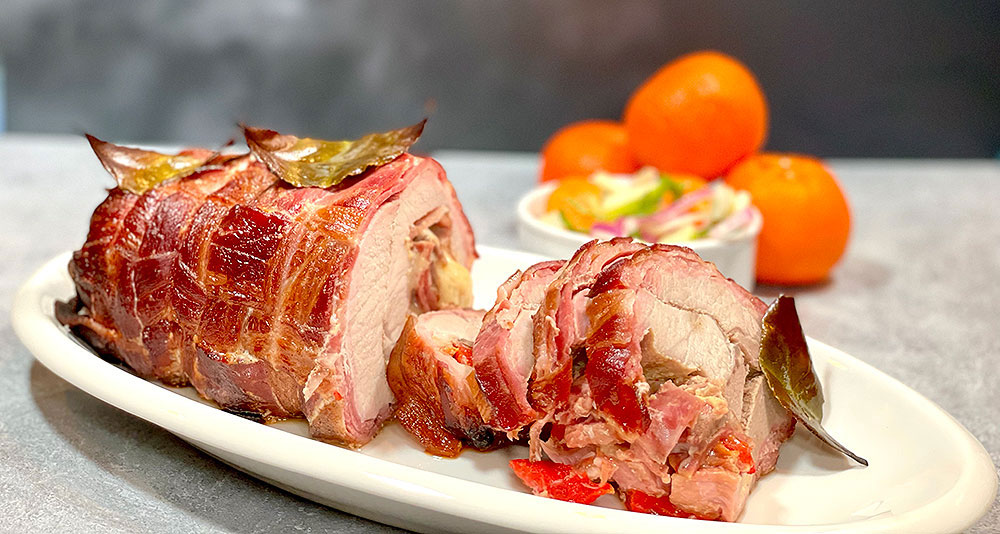 Pork loin is ideal for the grill and the smoker because the outside of the loin becomes crispy, the inside is juicy, and there is the added bonus of wood smoke. There are so many creative ways to prepare a pork loin. The flavors and seasonings are only limited by your imagination and access to ingredients. But, you might feel like a painter staring at a blank canvas due to all the possibilities for pork loin.

My wife and I love making pork loin or tenderloin because we can mix up the seasonings to create a new experience. I have experimented with a variety of preparations for pork loins. I have tried brining, butterflying and stuffing, wrapping with bacon, sauce and no sauce.

One time, I made Steven’s Bourbon Brown Sugar Smoked Pork Loin for a dinner with friends. It was stuffed, seasoned, wrapped with strips of bacon, and basted with a rum glaze. It was delicious, but some of the tasty filling leaked out while cooking.

The charcuterie stuffed pork loin will incorporate the techniques I have utilized while cooking pork loin, and I’m going to test two ways to keep the ingredients inside while cooking.

You’ve all heard Steven say how your food is raised is just as important as how you cook it. D’Artagnan Foods sent me one of their Berkshire 6-pound pork loins. It was huge! Berkshire pork, also known as Kurobuta, is from hogs raised on pastureland without antibiotics, added hormones, or growth stimulants. It’s world’s apart from grocery store pork aka “the other white meat.” Berkshire has more abundant marbling and is deep pink to red in color. D’Artagnan also sent me smoked duck breast, Bayonne ham, and smoked sausage to help me create the “charcuterie” pork loin.

Here is how it all came together.

Instead of just splitting open the pork loin, I butterflied it as if I was going to grill Steven’s Korean short ribs. I was able to cut the loin open and lay it flat in three sections. I thought I would be able to keep more of the filling inside by rolling the loin up like a jelly roll. Instead of laying strips of bacon lengthwise on the loin I made a bacon weave. I wondered if the weave would also help keep the “charcuterie” fillings in the loin rather than on the grill grate. 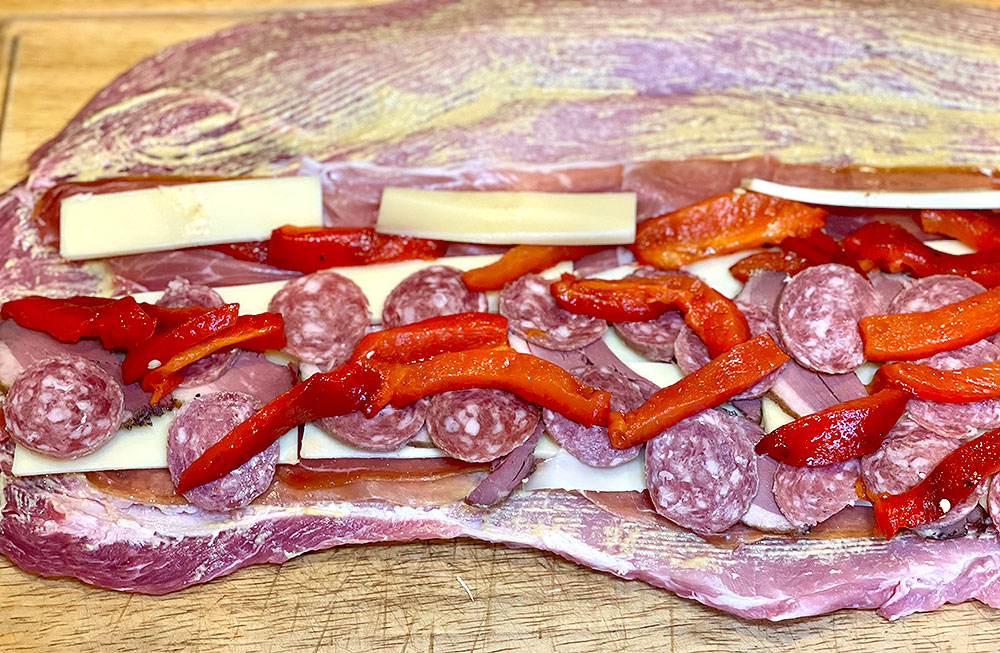 The inside of the loin was painted with Dijon mustard, and then I layered in the Bayonne ham, duck breast, cured sausage, Gruyère cheese, and roasted red peppers. I roasted, cooled, and sliced the red peppers prior to assembling the pork loin. I selected Gruyère cheese since it melts easy and would pair well with all the meats.

My first misstep was with my butterflying. I cut all the way through at one end of the pork loin that created a small hole. Would my fixings leak out or will my bacon weave help to keep everything inside? I rolled up the loin and the small hole became slightly bigger, and I could see some of the fixings and the red pepper.

The bacon weave was made ahead and placed on plastic wrap and left in the refrigerator to firm up. 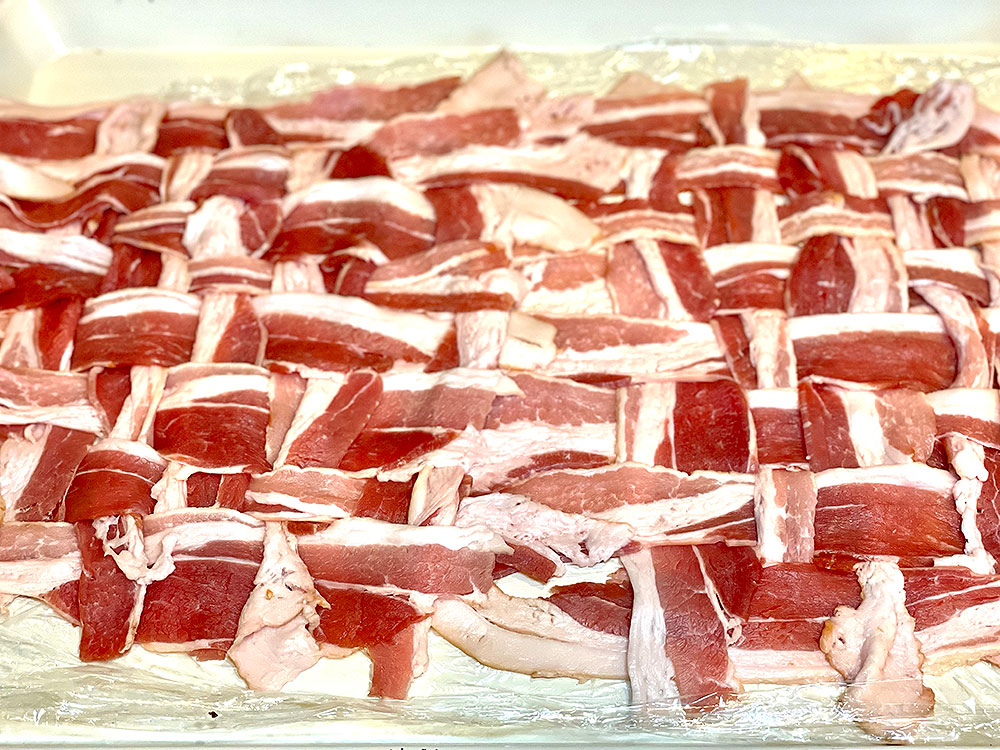 It was a challenge to keep the loin rolled up as I wrapped it in the bacon weave, but it all came together.

I kept the whole loin with the bacon weave wrapped in the plastic in the refrigerator for thirty minutes to help create a tight bundle for the grill. Next, I tied the loin with butcher’s string. 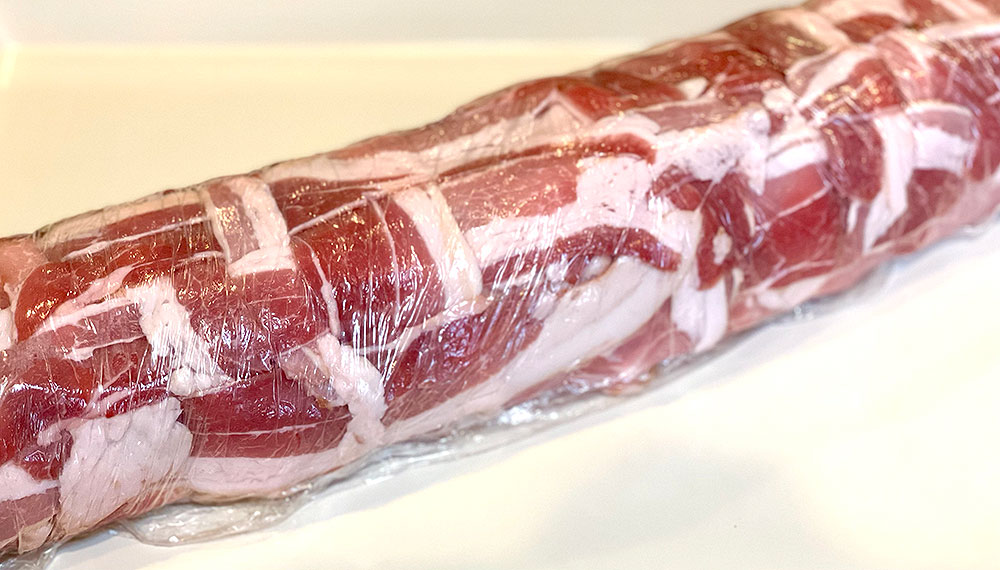 Once my Big Green Egg XL (BGE) was heated to medium-high, I added two apple chunks to create wood smoke. The pork loin was placed on the grate, and then I inserted a thermometer to track the temperature of the BGE and the pork loin. 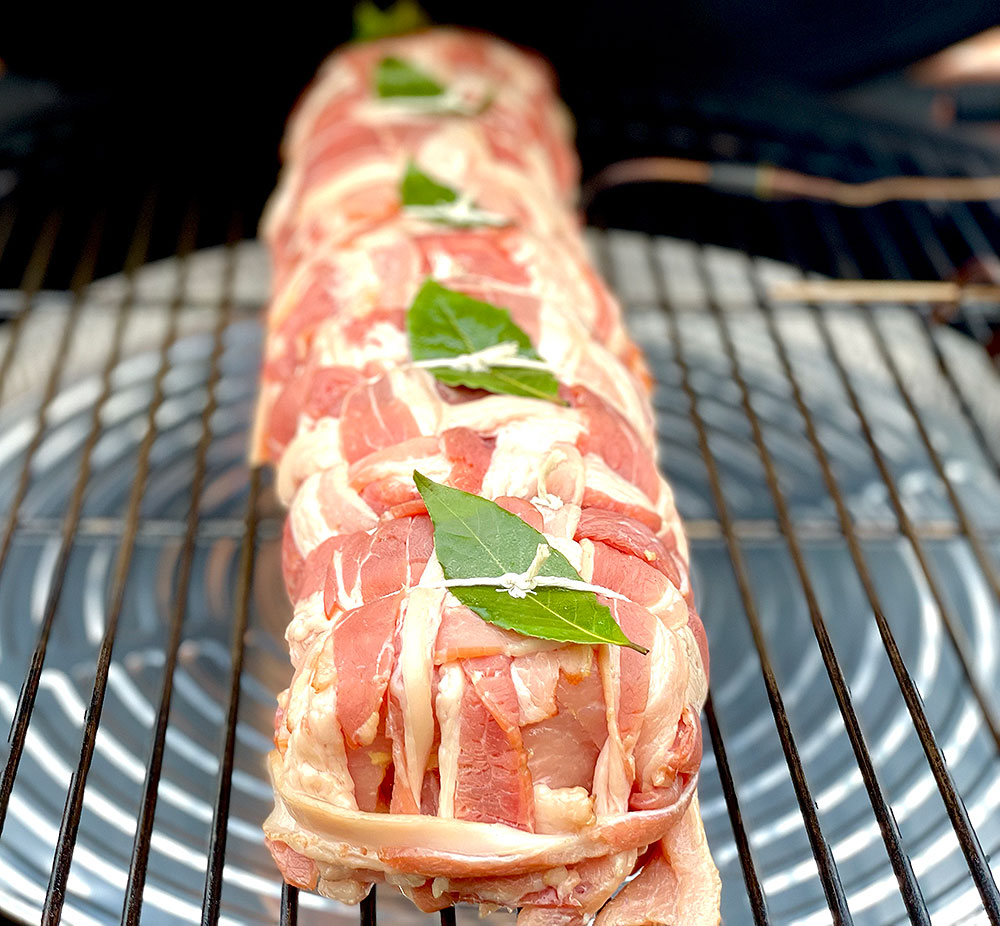 The bacon weave crisped up while cooking and the pork loin looked great, but some of the cheese leaked out. Once the pork reached 155 degrees on the thermometer, I removed it from the grill grate to rest and slice. 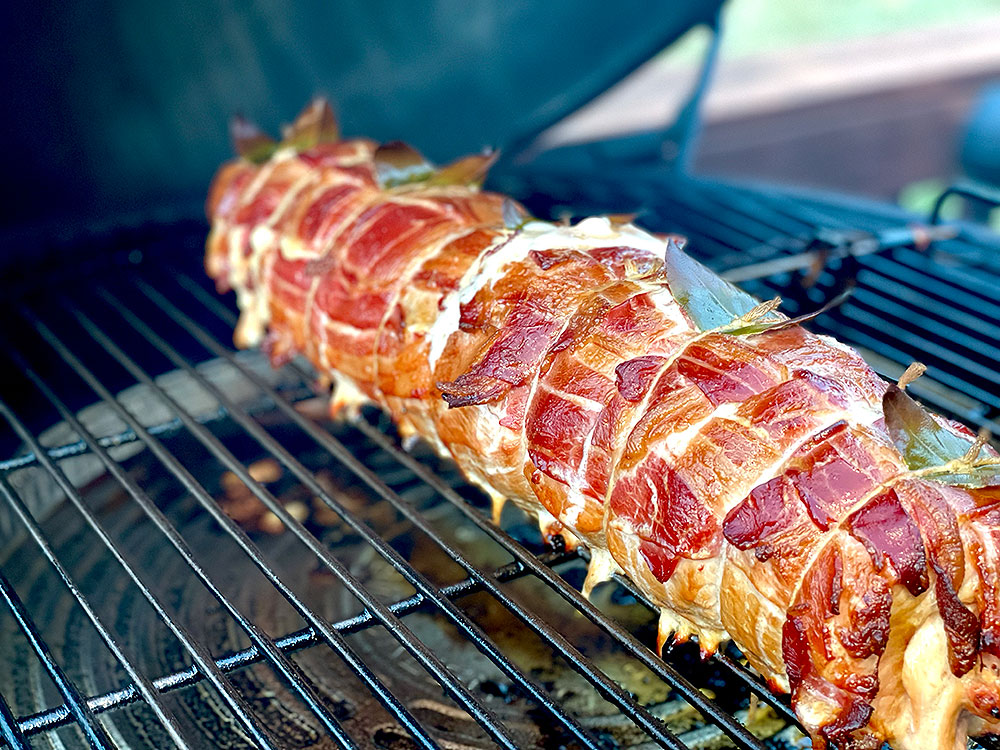 I discovered my second misstep while slicing the pork loin. I didn’t spread the ingredients far enough across the loin, or they slid back as a rolled up the loin and ended up in a pocket on one side of the loin. Luckily this error did not impact the taste.

The pork was flavorful and juicy, and there was even a smoke ring. The bacon weave was crispy and salty. The cheese was creamy, nutty, and melted around all the “fixings” on the inside. The duck and the sausage were buttery and provided a contrast in texture compared to the pork. The roasted red pepper was the pleasant and tasty surprise. It was smoky and provided freshness to balance the meat inside the pork loin. Despite losing some of the cheese and the fixings rolled up on one side of the pork loin, it was still a tasty experiment. 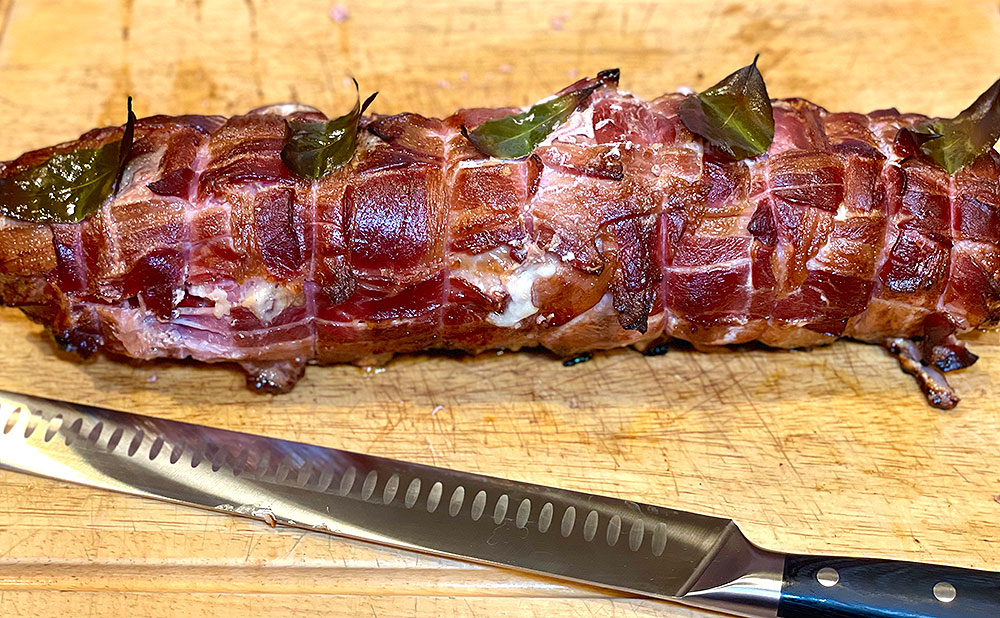 The perfect bite was a combination of the juicy pork, crispy bacon, creamy cheese, smoky red pepper and the velvety duck and sausage. The pork loin was delicious without all the “charcuterie” inside and the bacon on the outside. I served the pork loin with an orange and fennel salad. The fennel, orange, red onion, and mint salad provided freshness and a contrast in texture to the rich “charcuterie” pork loin. 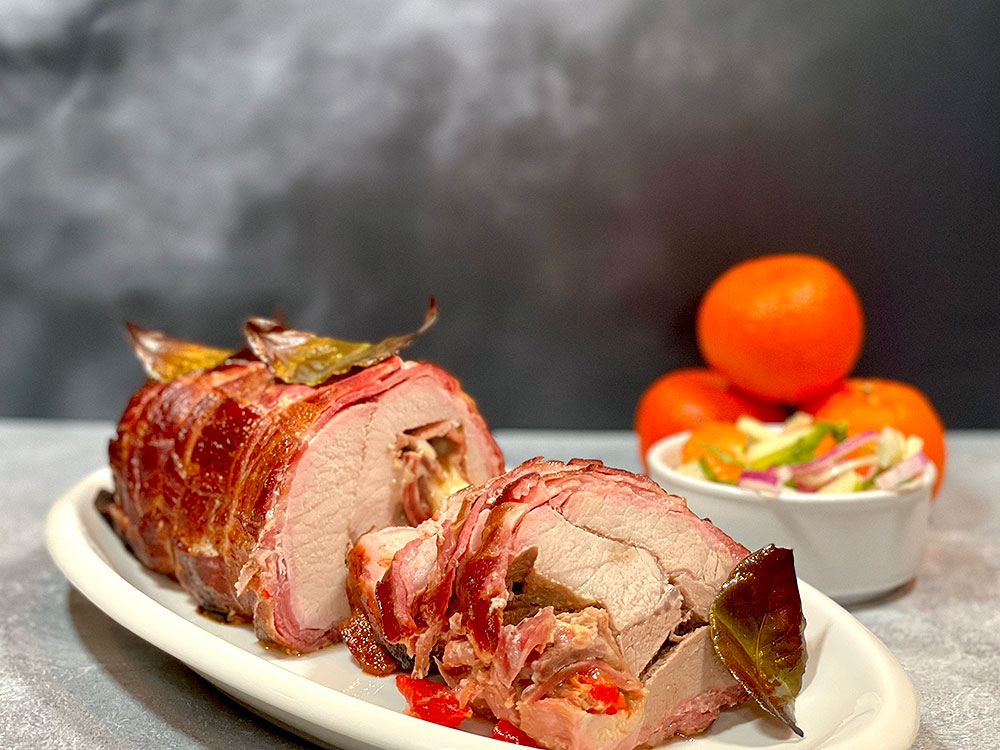