Host a Traditional New England Clambake on the Grill at Your House! 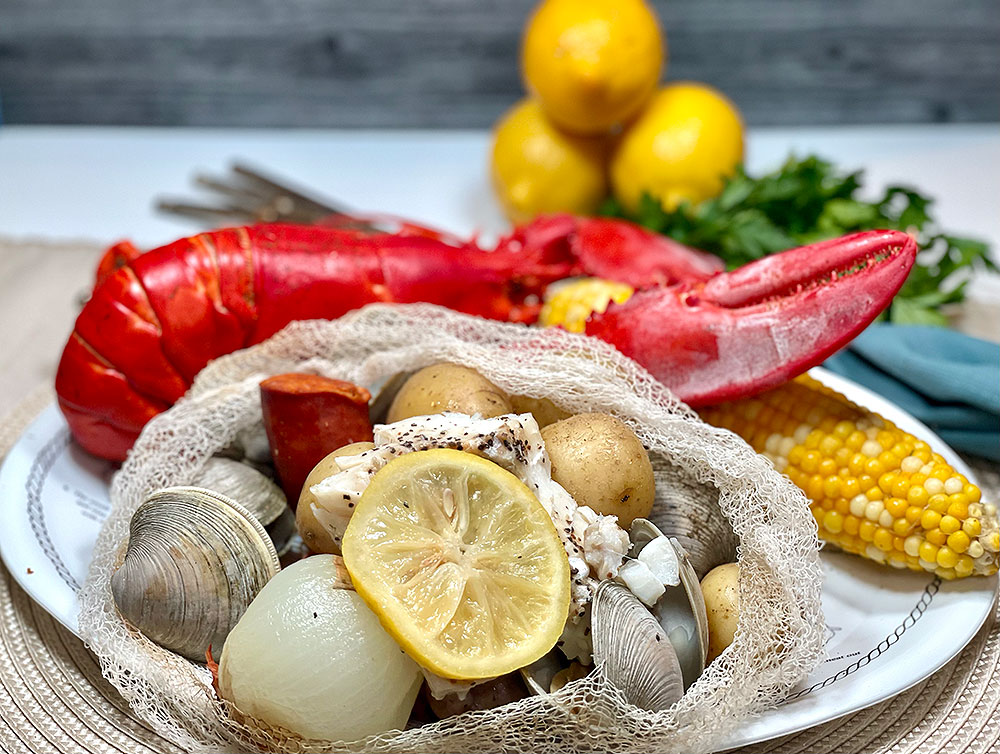 A clambake at the beach is classic New England, but not everyone has a beach nearby. Even if your favorite beach is right down the street (or even off your back deck), toting all the supplies to the beach for a clambake can be a challenge. I have a solution to both problems.

A grill-top clambake allows you to enjoy beachside-caliber seafood without traveling. If you make the trip to the beach, you want an easy way to transport all your supplies. If I was taking my clambake to the beach, I would utilize these cool products sent to me by Yeti. I had the opportunity to try their Hooper 20 Backpack Cooler, Hooper 30 Cooler bag, and the Loadout Bucket. 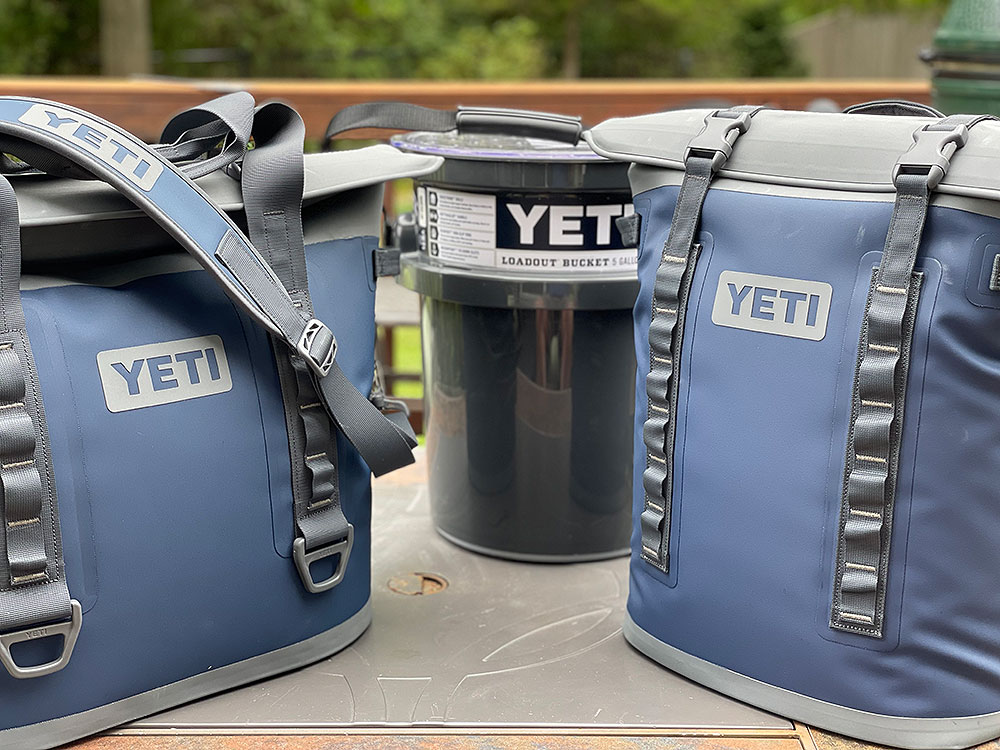 A traditional New England clambake can include any of the following: lobster; clams; potatoes; corn; mussels; quahogs (a clam common to the eastern seaboard); crabs; onions; and sausage. All the ingredients are placed in a pit oven layered in seaweed and covered with a piece of canvas that has been soaked in water. The heat from the fire and the moisture from the seaweed create steam that is captured by the canvas to cook the food. A clambake in a pot is often referred to as a clam boil, but you’re still steaming the food. 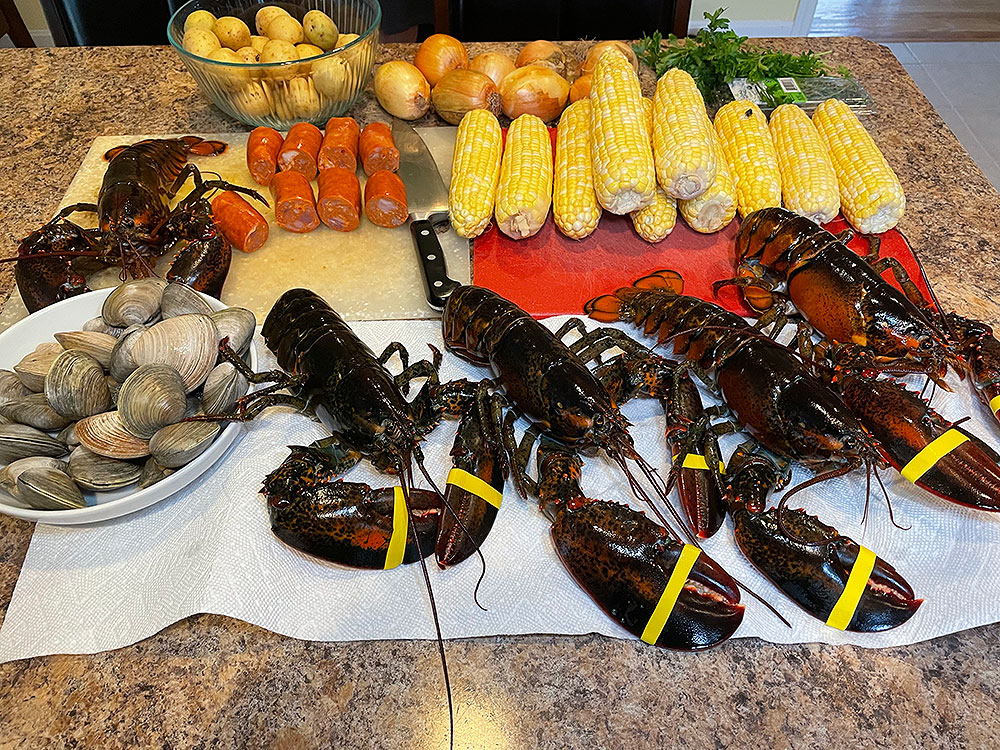 My wife grew up on the water and her family would host an annual clam boil. My in-laws, Larry and Barbara, would create their clam boil with fresh lobsters from their traps, fish they caught, and clams they dug themselves. They even had a cool copper pot they cooked the clam boil in. Recently, they have been hosting the clam boil at our house, so we have inherited the copper pot. 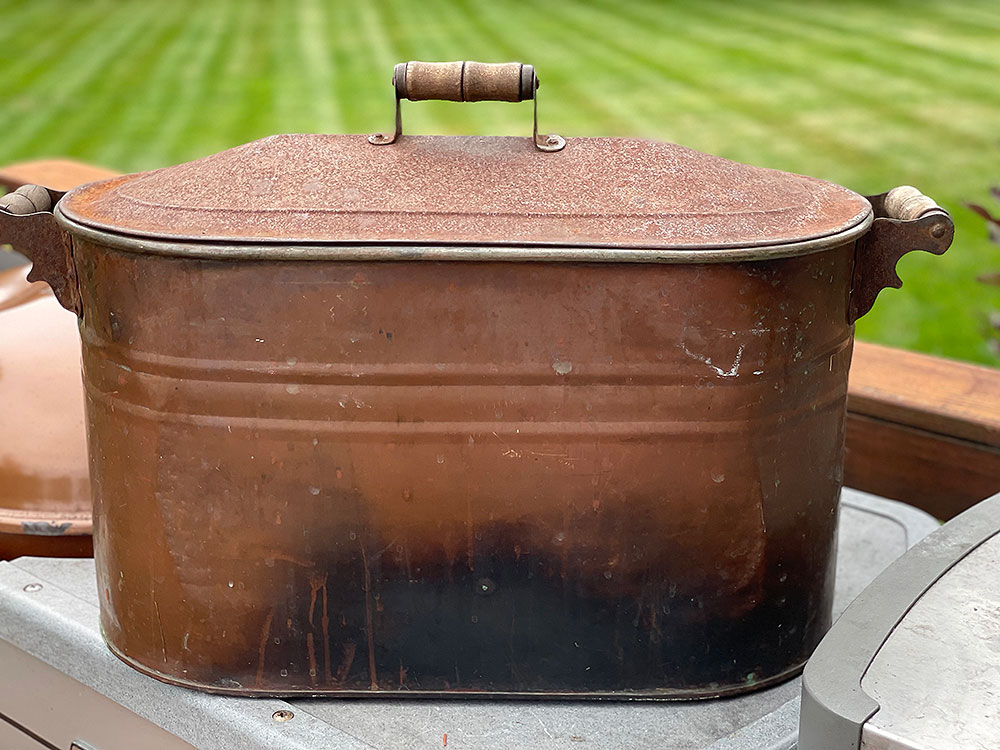 The ingredients for my clam boil consisted of lobster, littleneck clams, cod loin, potatoes, onions, chorizo, and fresh herbs. I selected what was fresh at the local seafood market for my clam boil. The clams were scrubbed and washed. The cod loin was cut into individual pieces, seasoned with kosher salt and freshly cracked black pepper, topped the lemon slices, and wrapped in parchment paper. The onions were peeled. Besides the lobsters and the corn, all the clams, potatoes, chorizo, and cod loin, were then placed in mesh bags. (The mesh bags make it easier to lift the food directly from the pot to a plate.) 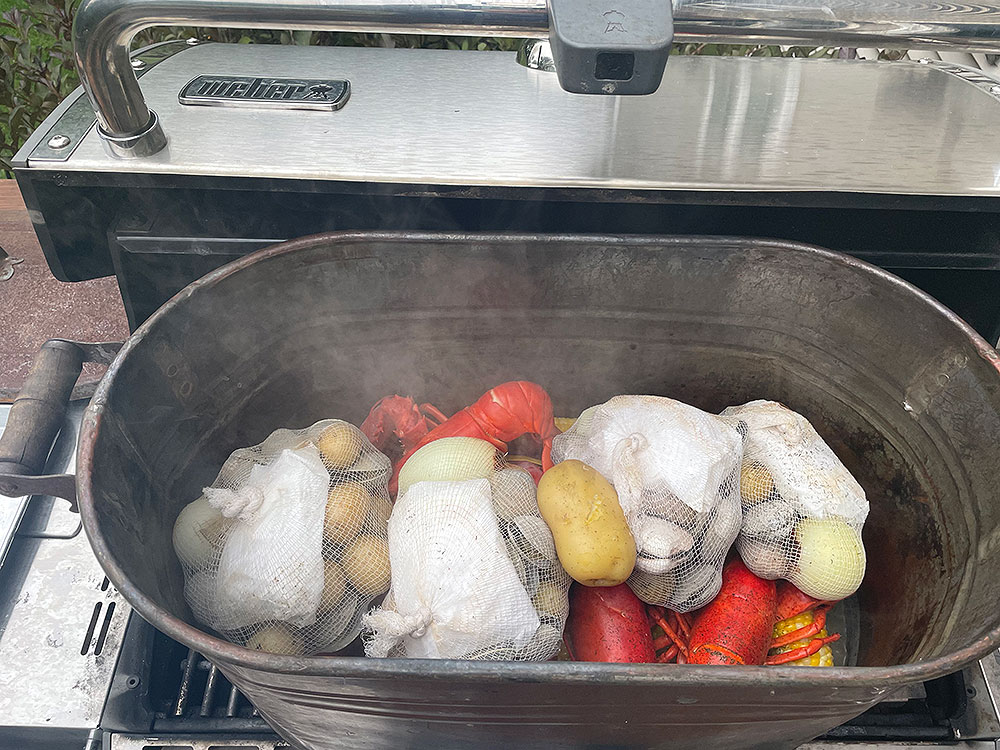 Once I saw the steam, I added fresh parsley, tarragon, thyme, and dill to the pot. Then I added the lobsters and corn and then placed the mesh bags containing the other ingredients on top. One cool trick I learned watching Larry and Barbara prepare their clam boil was to place a potato on the top of all the food in the pot: when the potato is cooked, the clam boil is ready. It’s the equivalent of the pop-up thermometers that sometimes come with Thanksgiving turkeys! 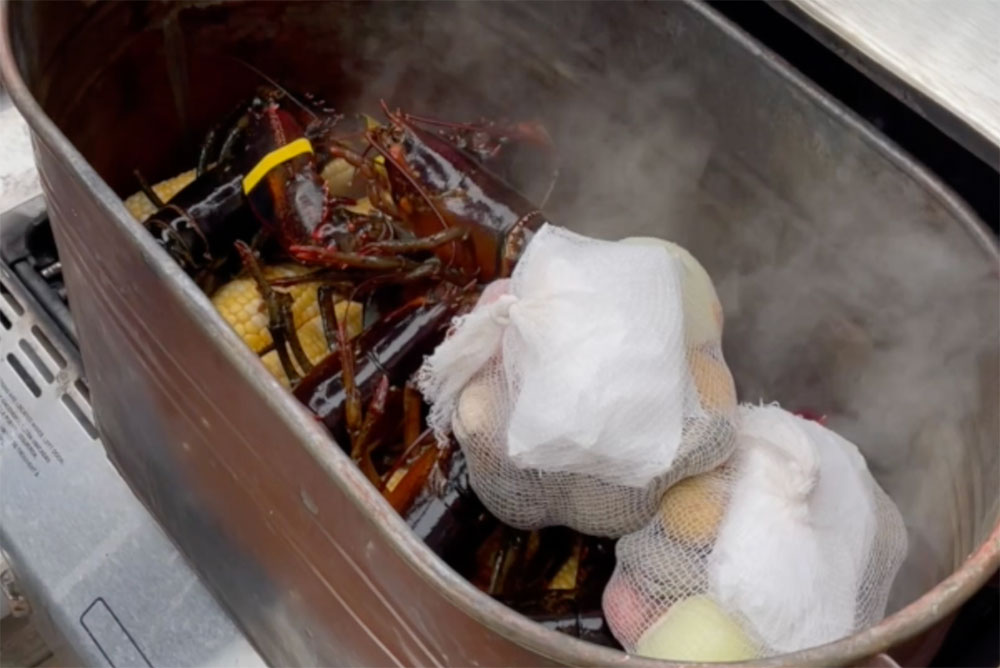 I served the food right from the pot by placing a bag of clams, potatoes, chorizo, and onion on each plate. Then the lobster and corn were added. Melted butter was waiting at the table. 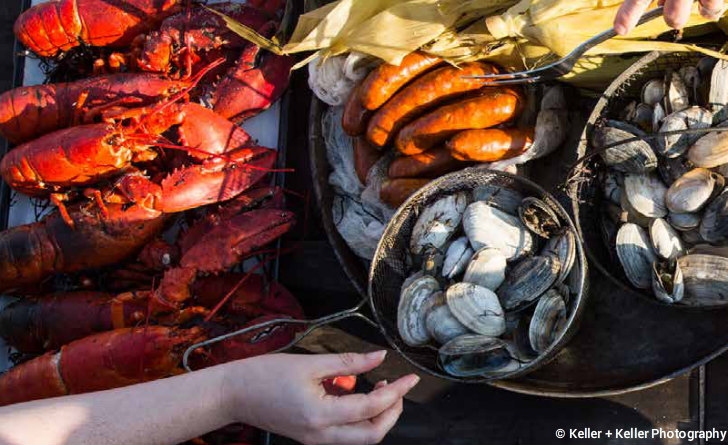 It is impressive to see so much food on one plate. The lobsters were sweet and luscious, and the butter makes them taste even better. The clams took on the fresh and briny aroma of the broth. The corn, potatoes, onion, and chorizo were the perfect complement to the stars of the clam boil…lobsters and clams. The cod loin in the parchment paper was a bonus.

If I was planning a clambake on the beach, here is how I would transport everything by myself. But a clambake at the beach is best shared with family and friends, so there should be plenty of people to help carry everything. 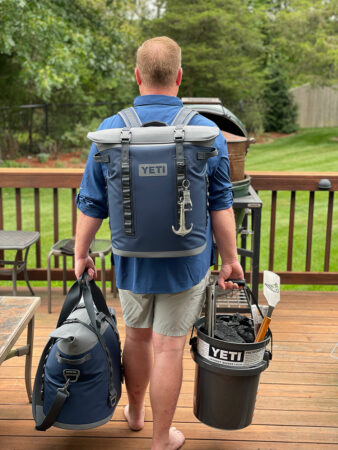 The cooler bag is ideal for all the perishable clambake ingredients like the clams, lobster, and any other ingredients you plan to feature in the clambake. And there would still be room for your beverages. The cooler backpack comes with a shoulder strap to make it easier to transport. The backpack cooler allows for “hands-free” carrying and can be used to transport additional ice or food, or can be left dry to transport anything heavy. The sturdy shoulder straps make the backpack the ideal way to lighten the load when transporting your “stuff” across the beach or on a hike. The backpack is tall enough for a bottle of champagne or wine. Champagne pairs well with lobster and elevates your whole clambake. Both the cooler bag and the backpack cooler come with Yeti’s Magshield access technology. Powerful magnets create a leak-resistant shield that snaps closed with a gentle push. Both coolers come with the hitch point grid that allows you attach other accessories or your favorite wine and bottle opener. 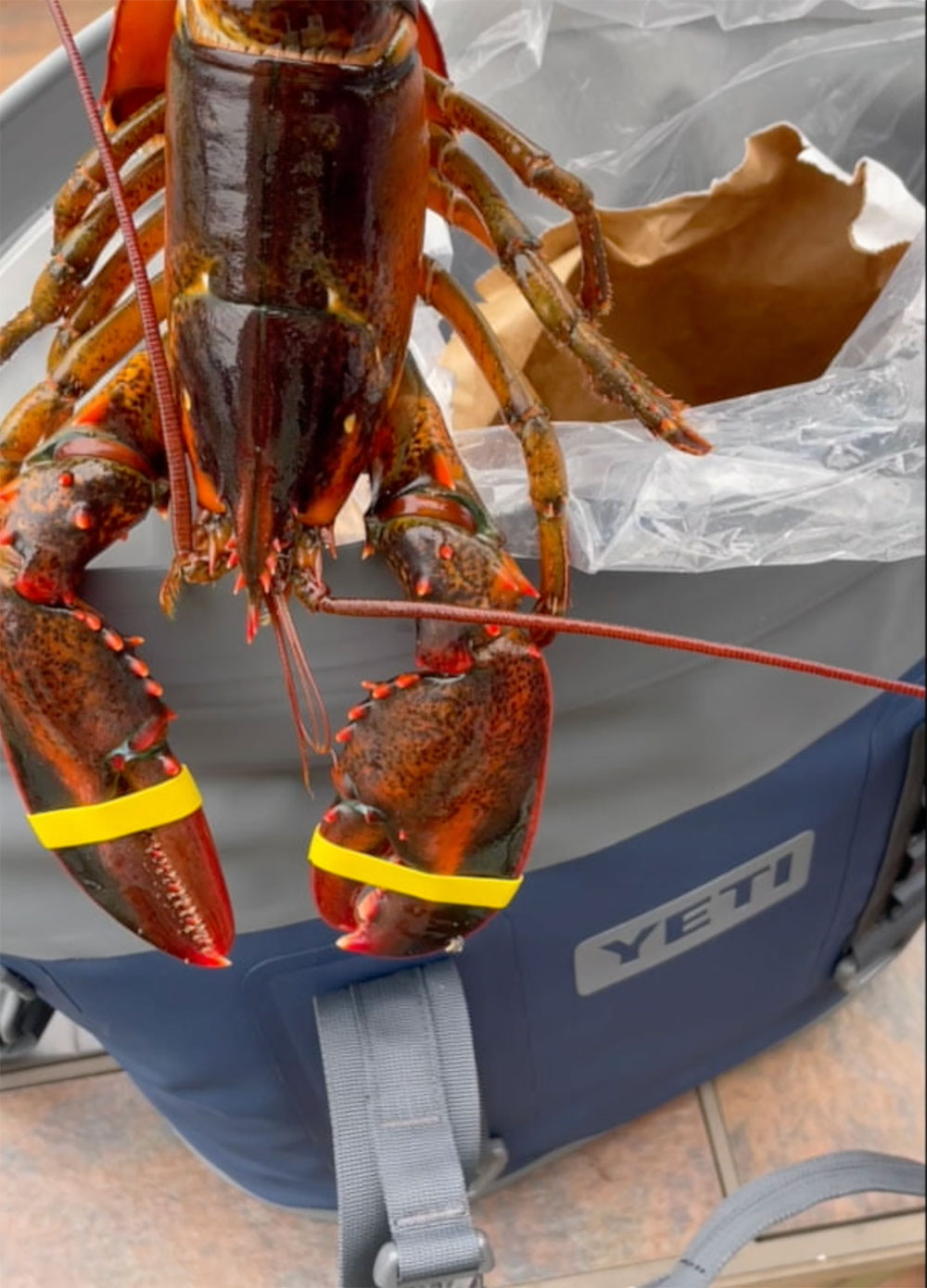 The loadout bucket is a is the Swiss army knife of buckets. It is heavy duty and three times as strong as the standard bucket. It is food safe and large enough to brine a turkey. It has a non-slip ring on the bottom, so it stays put when you put it down, no sliding or slipping ,and it is non-marking. The loadout bucket is perfect for transporting your wood or charcoal to the beach. Or to collect seaweed at the beach for your clambake. My favorite accessory was the bucket lid. It is clear so you can see what is inside. The lid is easy to remove, locks down tight, and will support up to 300 pounds. 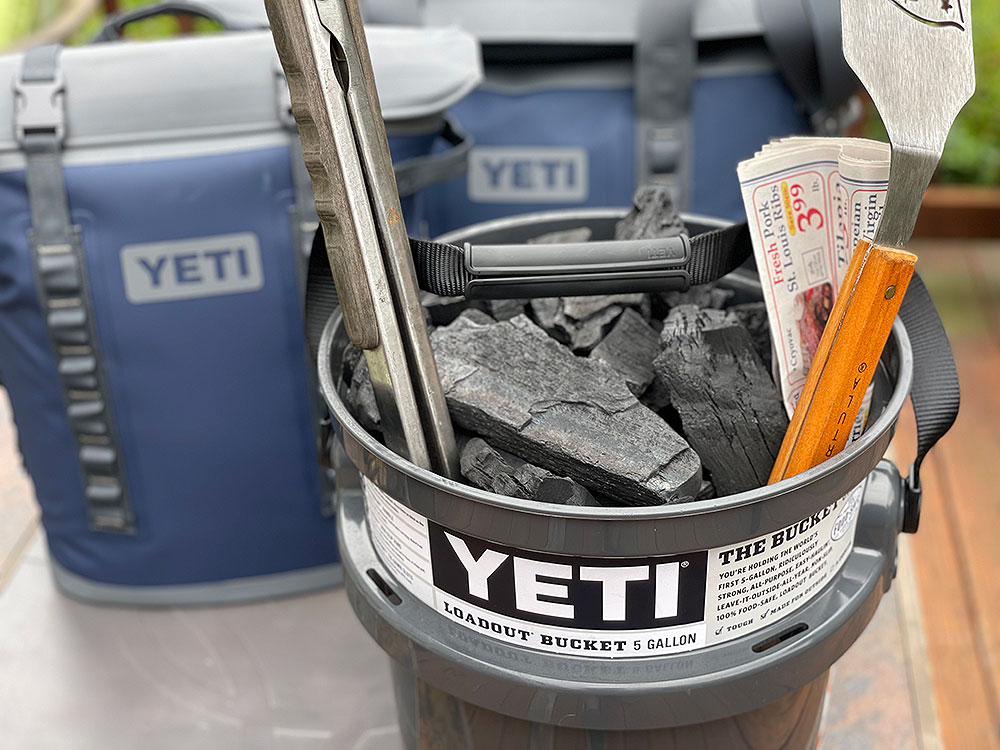