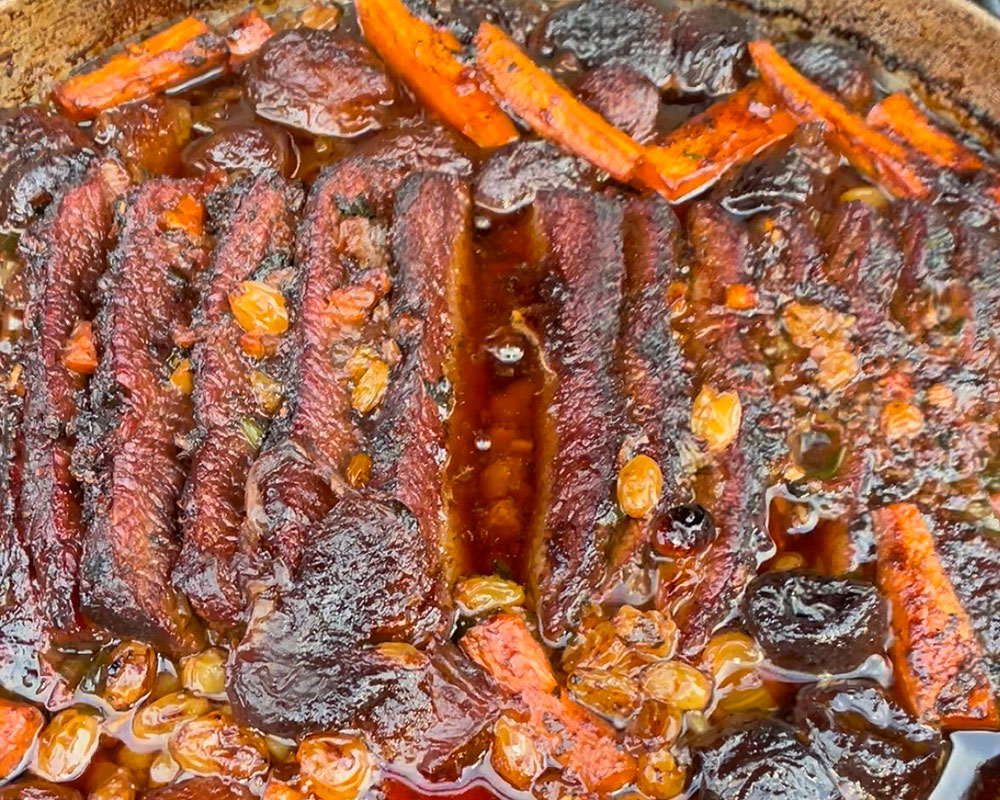 Is the menu for your holiday meal a hard-and-fast tradition? Is it something you watched a family member cook for years? Or did you help in the kitchen every year and now the recipe and the cooking has been passed on to you? For many of us, what we cook for a holiday meal is sacrosanct. Some of us are creating our own traditions to pass on to the next generation.

Recently, I received a Santa Carota Carrot-Finished Brisket from the Holy Grail Steak Company. The carrot-finished briskets come from cattle free of hormones, antibiotics, non-GMO, and are free-range.

Steven Raichlen challenged me to create a holiday-themed brisket. I’m sure if I lived in Texas, brisket would most likely be a holiday tradition. I live in New England, so I went to Steven’s book, The Brisket Chronicles, to find my inspiration.

One definition I found for the word tradition is “the handing down of information, beliefs, and customs by word or mouth or by example from one generation to another without written instruction.”

“Without written instruction” is key here. If you are like me, there are recipes you have asked your family for, and they tell you they aren’t written down. So frustrating!

I’m familiar with several of the recipes in The Brisket Chronicles thanks to working in the test kitchen, but I didn’t remember one that I would consider a “holiday” brisket. I was hoping to find a recipe with some history and something I would not normally make with a brisket. I found it in Aunt Annette’s Holiday Brisket with Sweet Wine and Dried Fruits recipe (page 133). 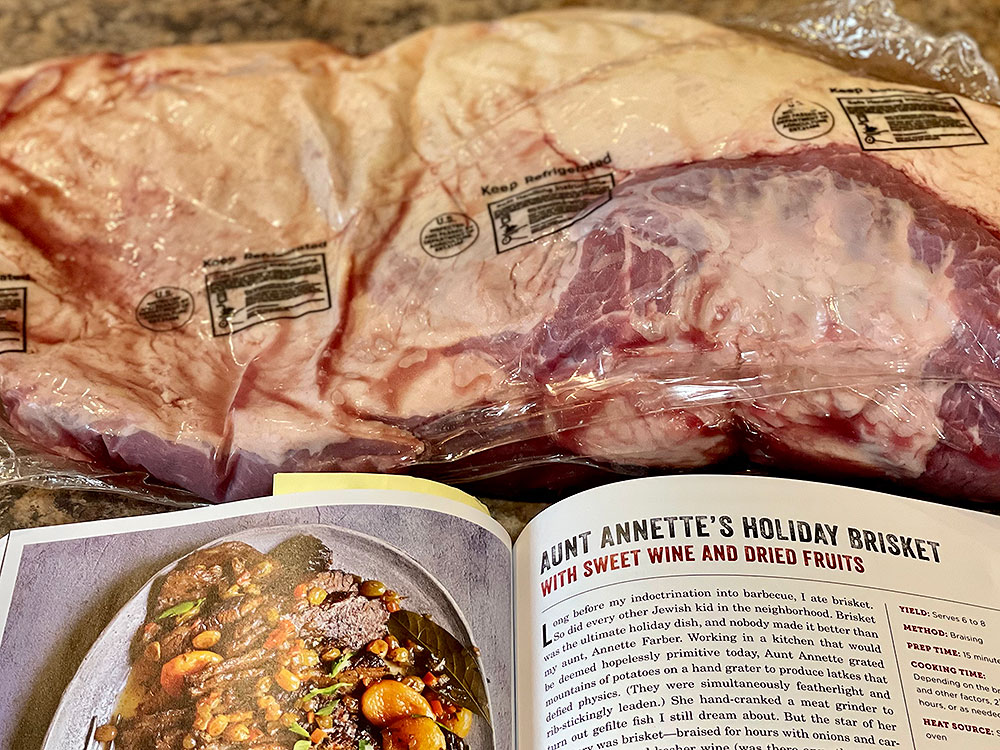 Aunt Annette’s brisket was a tradition in Steven’s family, so I hope my attempt is up to par. I made one modification to her recipe: Instead of braising the meat in the oven in a Dutch oven, I decided to smoke-braise the brisket in the Big Green Egg XL (BGE).

This recipe starts on the stove and finishes on the grill. I set up the BGE for indirect grilling and heated it to 350 degrees. I added a few wood chunks to create wood smoke.

The recipe is prepared with a brisket flat, so I started by separating the flat from the point. The flat is generously seasoned with kosher salt and coarsely ground fresh black pepper and then browned in a roasting pan or Dutch oven. Once the flat was browned, I removed it and started sautéing the carrots, celery, onion, garlic, and parsley. I returned the brisket to the roasting pan and topped it with half of the veggies and added the wine and beef broth. 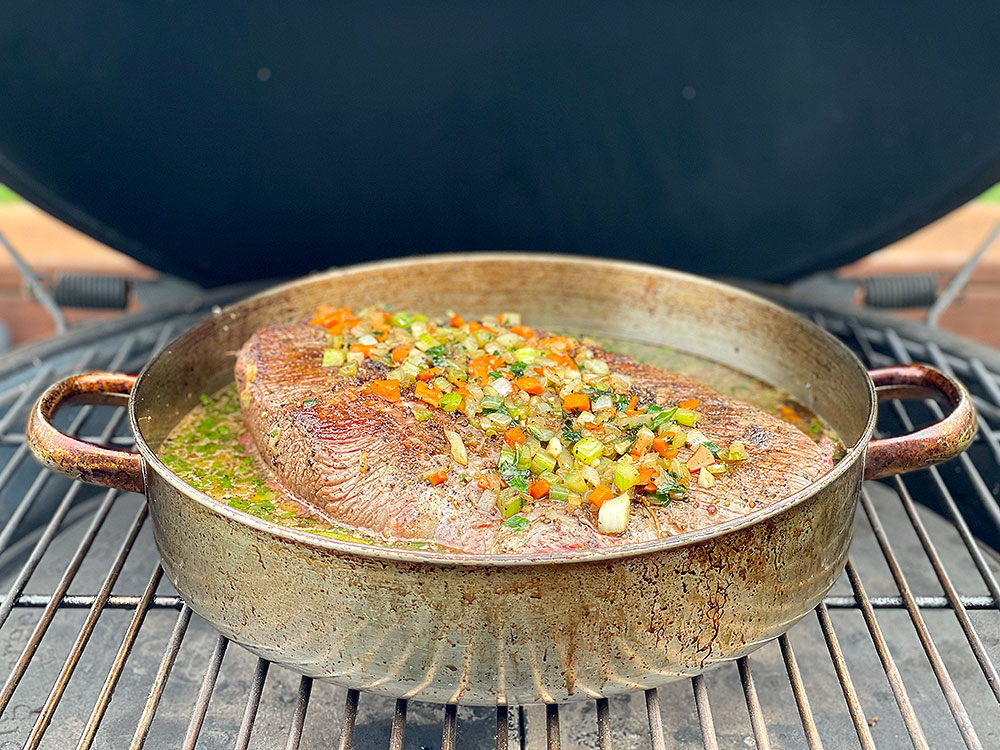 Next, I placed the roasting pan in the BGE for the first half of the cook. The brisket smoke-braised for 90 minutes. The next step was a usual one…slicing the brisket halfway through the cook and then returning the slices to the braising liquid. Don’t bother trying the brisket after slicing as it will still be tough. Once I returned the brisket to the pan I added the apricots, prunes, golden raisins, and the remaining carrots. Everything smoke-roasted for an additional 90 minutes. 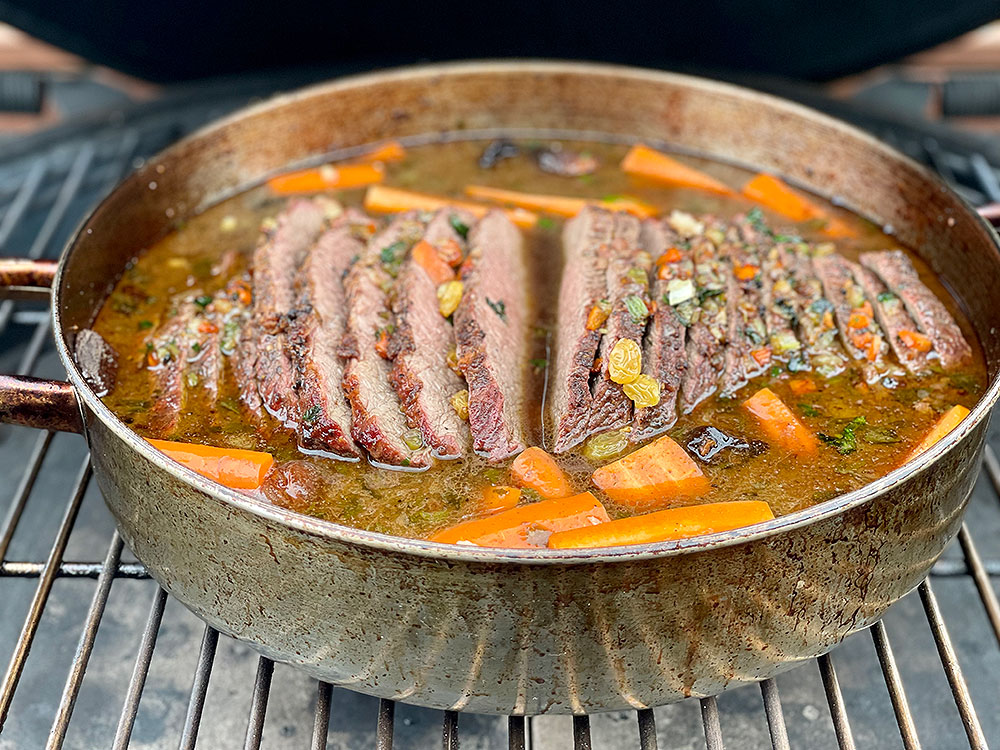 To serve I spooned the sauce, fruits, and carrots into a bowl and topped with brisket slices and garnished with parsley. 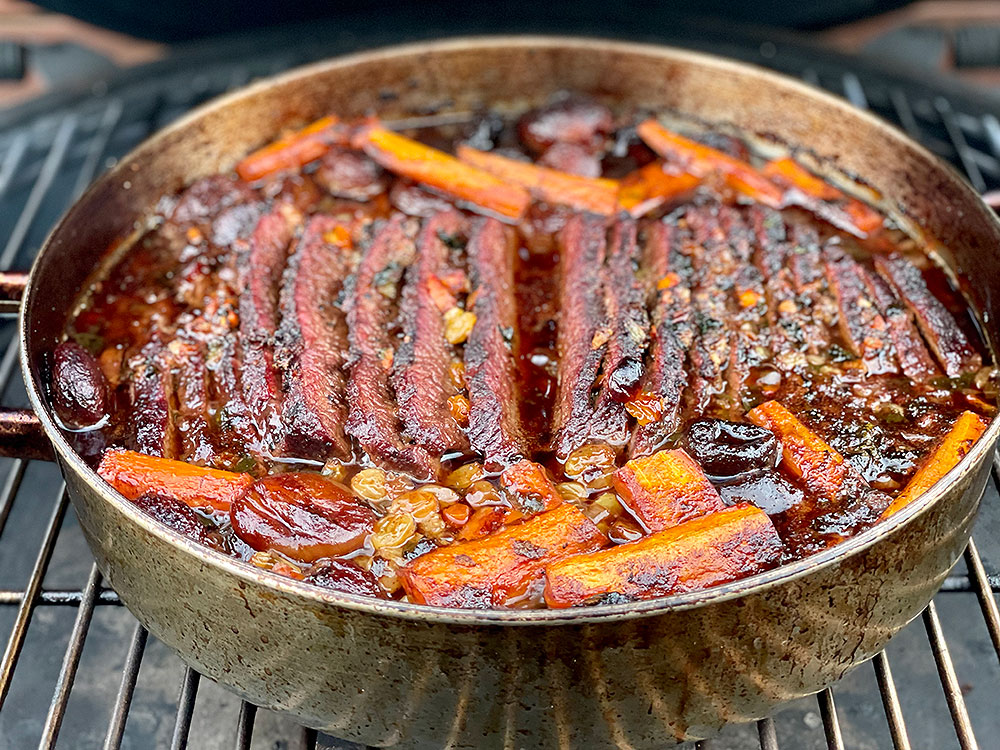 The aroma that permeated the kitchen was awesome. The brisket took on a dark color from absorbing the wine and the broth. The fruit broke down and the braising liquid reduced to create a bubbling rich mahogany-colored sauce. The brisket was fork-tender and bursting with flavor with a luscious mouthfeel. The beef flavor was not overpowered by the fruit in the braising liquid. The fruit and carrots in the sauce were sweet but balanced the beef flavor of the brisket. I thought the fruit and wine might make the sauce too sweet, but nope. This was a warm and filling dish without making me feel like I needed a nap after eating. The only thing I missed was grilled bread to dunk in the delicious sauce. 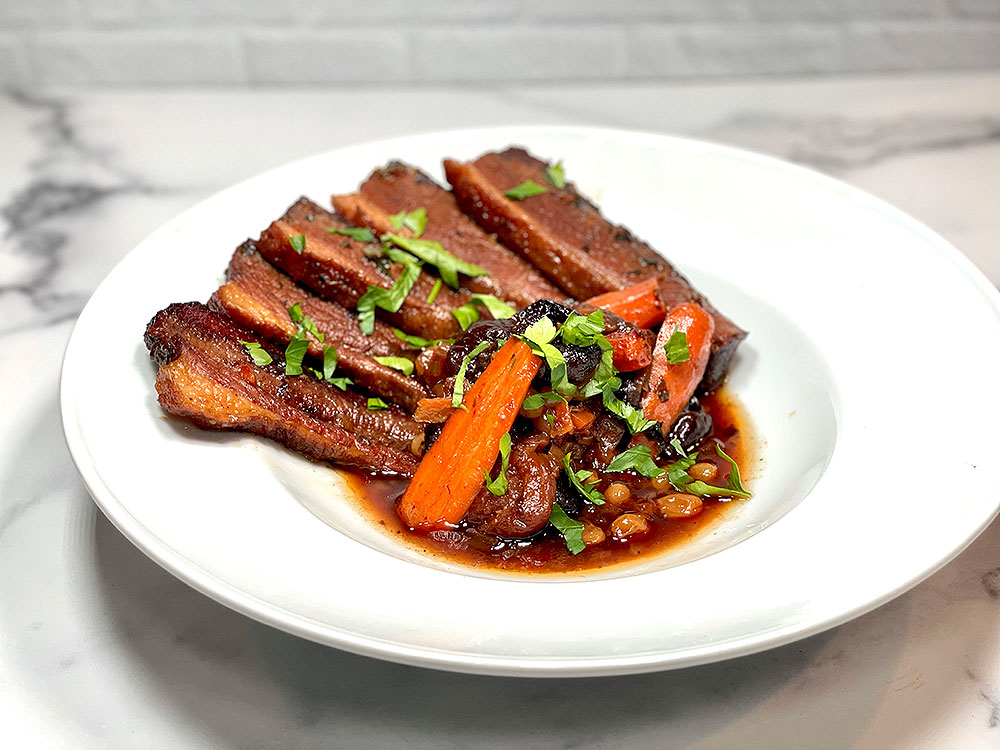 I now understand why this dish was a tradition in the Raichlen family. Made with Holy Grail’s always excellent beef, brisket, I predict, will become one of my family’s holiday traditions, too.