Something New for Thanksgiving: Smoked Pumpkin ‘Pi’ in a Solo Stove 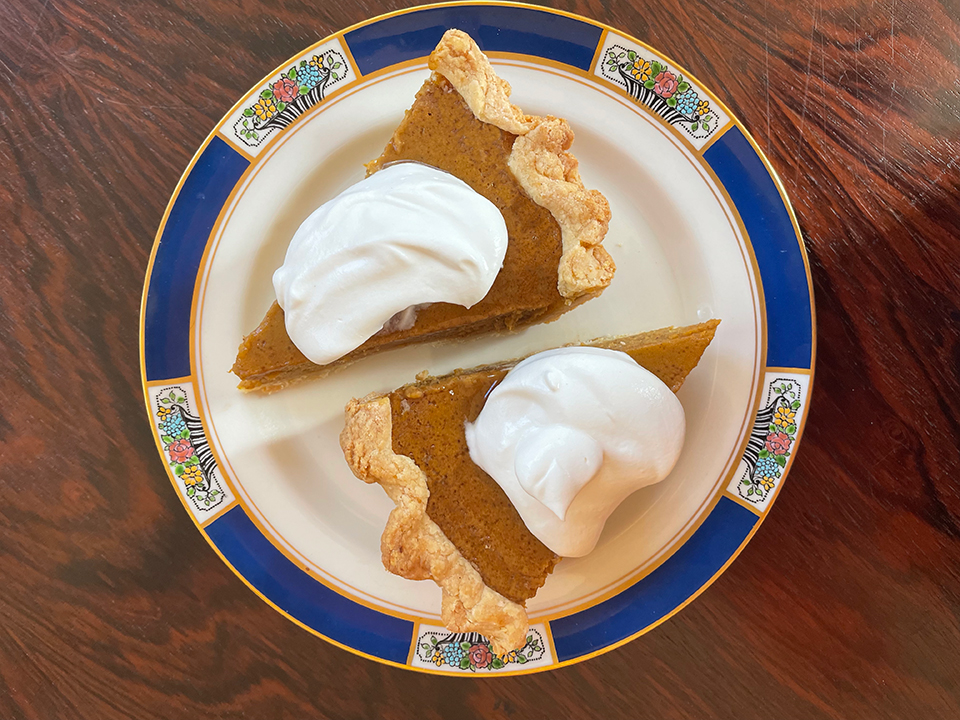 Nothing is more traditional than pumpkin pie for desert on Thanksgiving. It’s always a family favorite and, despite how overstuffed we are from the Thanksgiving meal itself, there’s always room.

However, there’s a ‘nonconformist’ gene in our family. Sometimes we revel in bucking tradition because, well, that’s who we are!

This year was no exception, as we dared ourselves to create a pumpkin pie that, while traditional on its surface (it is a pie, and it is made primarily from pumpkin), was anything but that in its preparation and (primary) ingredients.

We first threw caution to the wind by deciding to cook the pumpkin in our Solo Stove Pi Pizza Oven. It seemed as if it would suit our needs perfectly (and it did) – as the oven is easy to set up, starts quickly, holds its temperature well, and provides a nice woodsy, smoky flavor to the meat of the pumpkin. 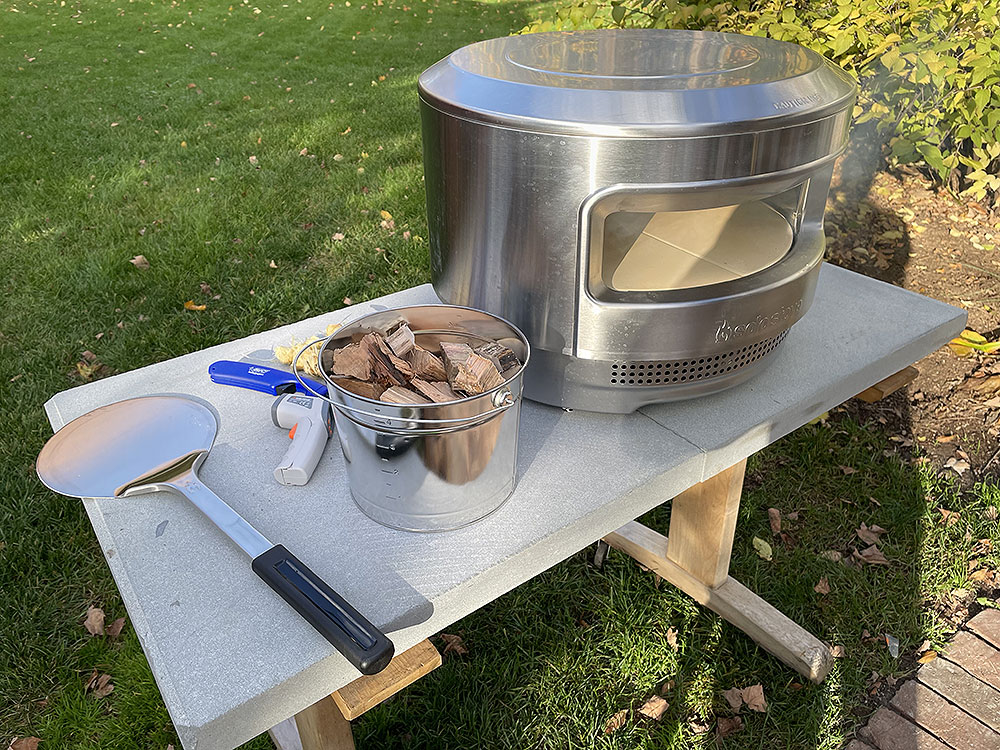 We also went rogue in our choice of pumpkin by opting for an heirloom Jarrahdale variety, which is a bit denser than a traditional sugar (pie) pumpkin. It has a nuttier, more earthy taste. (What it lacks in physical beauty it more than makes up for in flavor.) We also chose the Jarrahdale pumpkin because, when sliced in half horizontally, it fit perfectly into the Solo Stove Pi Pizza Oven! 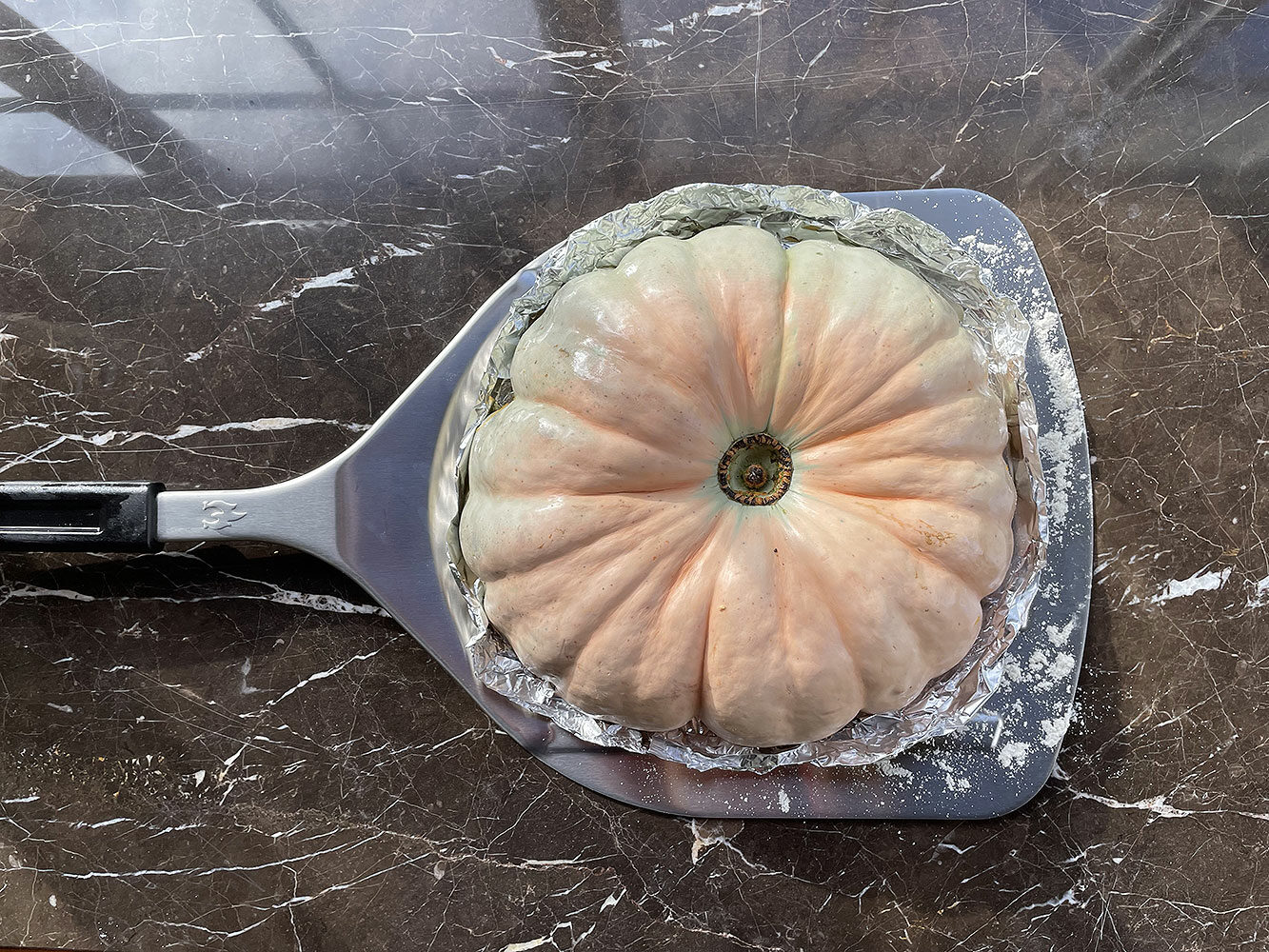 A traditional flour-based crust wouldn’t do either as we’re a gluten-free family – not that this matters so much because, with this recipe, the difference is undetectable (of course, if you’re inclined to use a flour-based pie crust, that’s okay, too).

Finally, while whipped cream makes the perfect topper, substituting maple syrup for the sugar brings to this garnish a taste of New England where Thanksgiving started, after all!

The Process: Cooking the Pumpkin

Perhaps the easiest part of this recipe was preparing and roasting the Jarrahdale pumpkin in the Solo Stove Pi Pizza Oven.

First, as mentioned, we sliced the pumpkin in half horizontally, then scooped out the seeds and stringy bits, leaving the pulp intact. 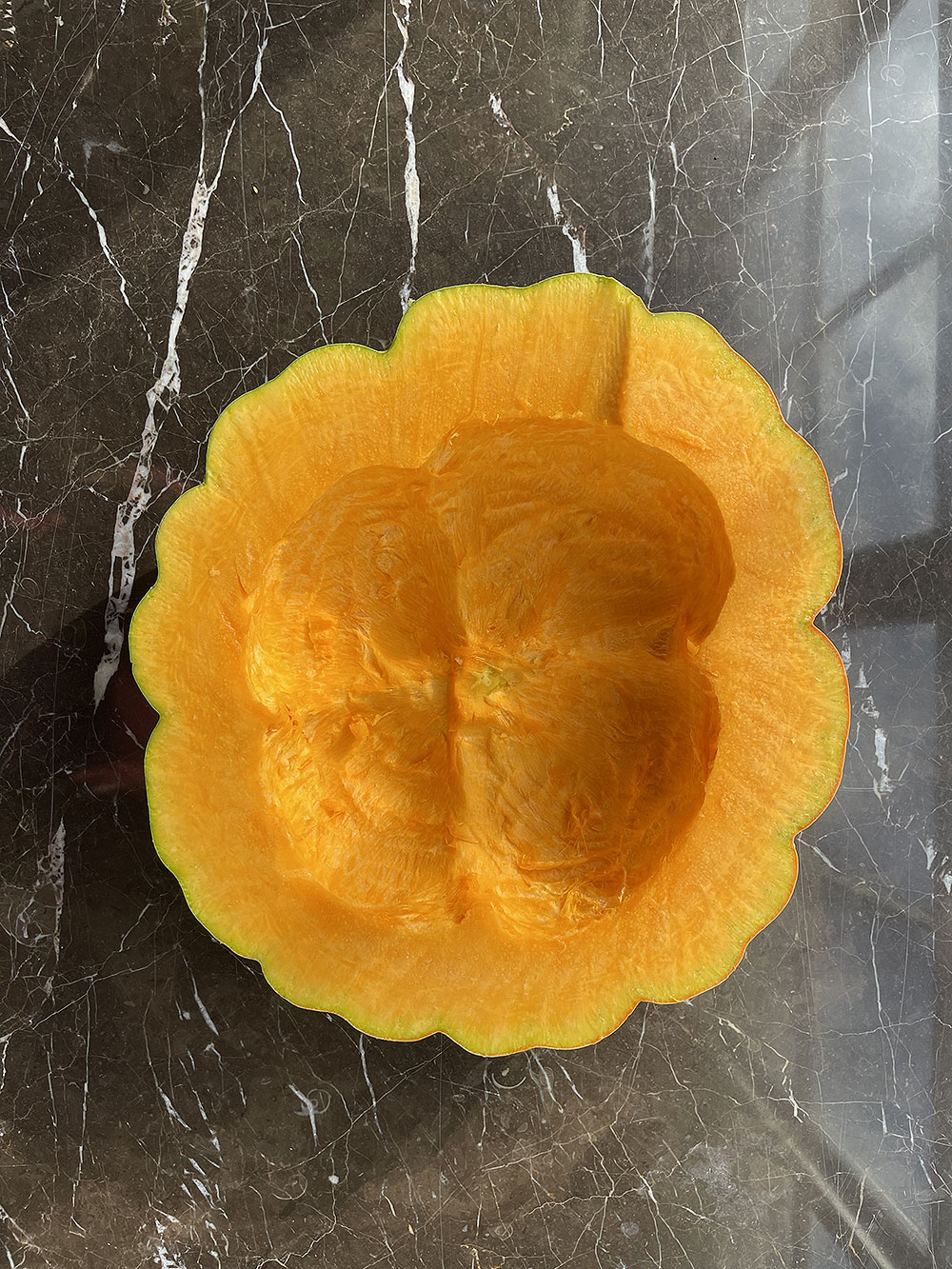 To start the oven, we placed three Weber Quick Light Fire Starters in the ash receptacle of the Pi, along with six small strips of oak (pilfered from my cordwood) into the fuel grate and, within three or four minutes, the oak began to flame nicely, at which point we added more oak in tandem with hickory (now introduced into the mix). We continued to add more hickory as the fire intensified and, within 15 minutes, the pizza stones inside the oven reached a temperature of 450 degrees – hot enough to slide the pumpkin (placed on a sheet of aluminum foil) into the stove with a pizza peel and begin roasting.

As the pumpkin roasted, fuel (hickory and oak) was monitored and added as necessary to keep the temperature of the pizza stones between 450 and 500 degrees. While keeping a close eye on the fire and the temperature, we continuously rotated the pumpkin with the peel to ensure that the pumpkin cooked evenly. After 15 minutes in the Pi, we tested the ‘doneness’ of the pumpkin every 5 minutes with a small, metal skewer. After thirty minutes, the skewer slid easily into the pumpkin meat with no resistance, indicating it was fully cooked. (Your time will depend on the size and density of your pumpkin.) 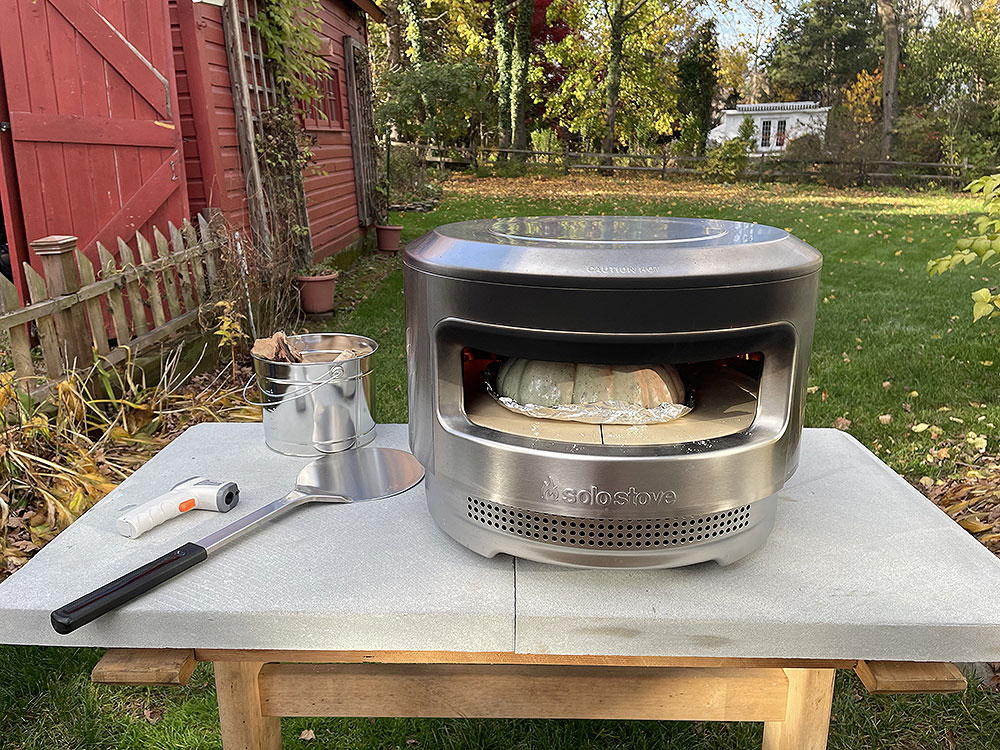 After leaving the cooked pumpkin to rest and cool for about 15 minutes, we scooped out the meat and placed it in a food processor (be careful not to overfill) and pureed it into an even consistency that was not watery or soupy, but smooth and chunk-free.

The Recipes: Crust, Pie, and Topping 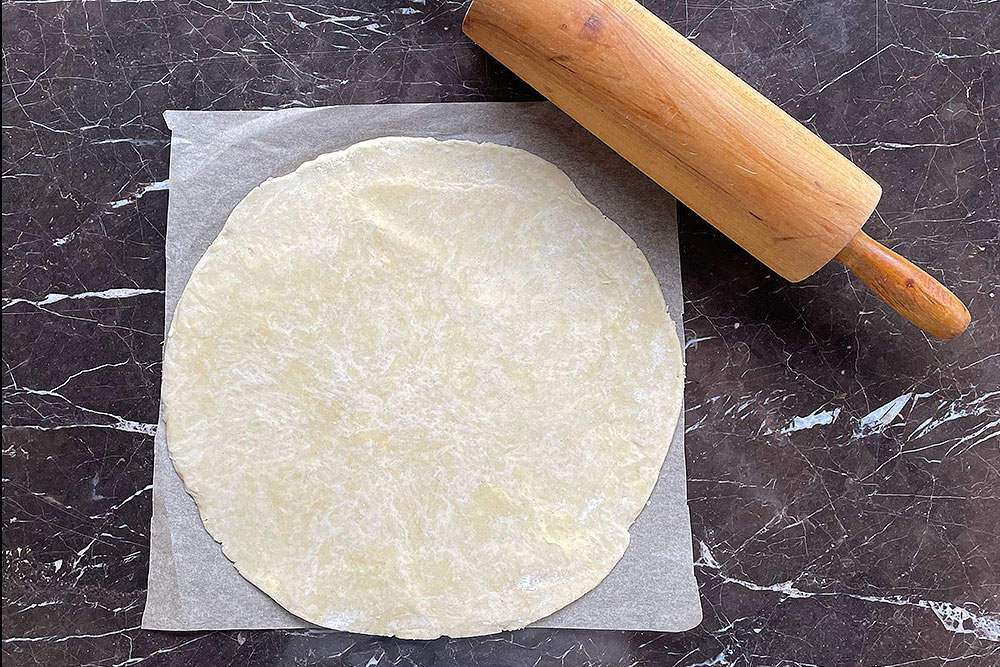 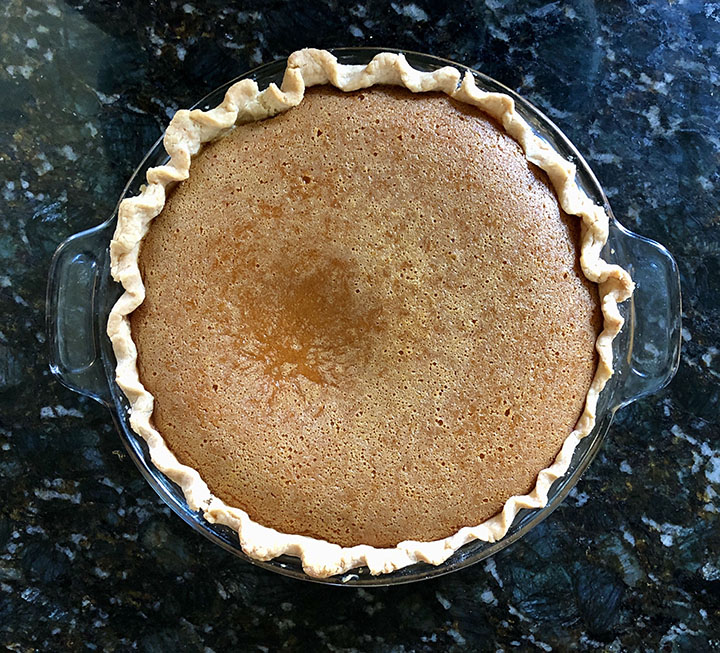 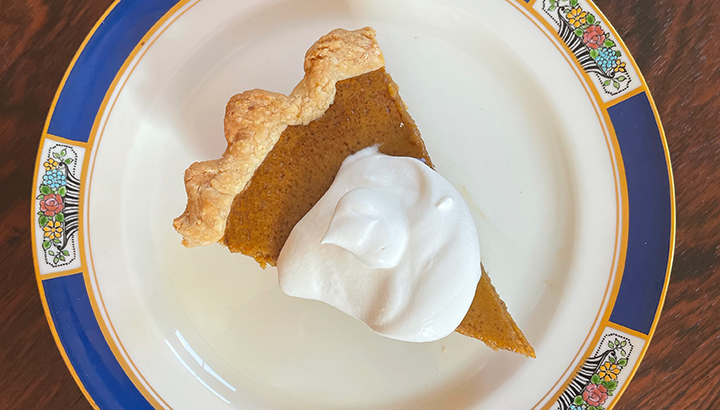