In Praise of Pork Shoulder, Part 3: How to Cook It 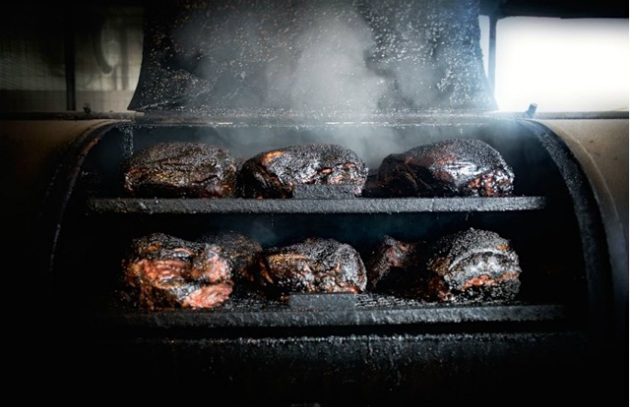 The pork shoulder may be the world’s simplest cut of meat to cook. Simpler than steak. Simpler than brisket. Simpler than ribs. In a nutshell, you season the hell out of it (for tips on buying and seasoning pork shoulder, see Parts 1 and 2 of this series) and cook it at a low to moderate heat for 3 to 6 hours (2-1/2 to 3 hours at 350 degrees; 5 to 6 hours at 250 degrees.) What emerges from your smoker or grill gives you a bodacious blend of crisp crust, luscious fat, and meltingly tender meat.

But simple doesn’t mean simple-minded. You’ll need to know about some essential gear and techniques to get it right.

Thanks to its generous marbling, pork shoulder lends itself to a variety of live fire cooking methods, including indirect grilling, smoking, and spit-roasting. The advantage of these methods is that you get both a crisp crust and moist, tender meat.

Pork shoulder is one cut I encourage you to overcook. In recent years, it’s been fashionable to serve pork medium or even medium-rare, which is fine for lean, tender cuts, like loin and tenderloin. Most of the world’s grill cultures serve pork shoulder well-done, that is, cooked to about 195 degrees F. Only at this internal temperature can the shoulder be “pulled” (torn) or chopped into the meaty shreds so prized for Carolina pulled pork. Get the right gear:

A final word on serving:

You might think serving is the easy part, but there are a few tricks of the trade you should know.