Raichlen Drinks the Kool-Aid: A Visit to the Big Green Egg Headquarters 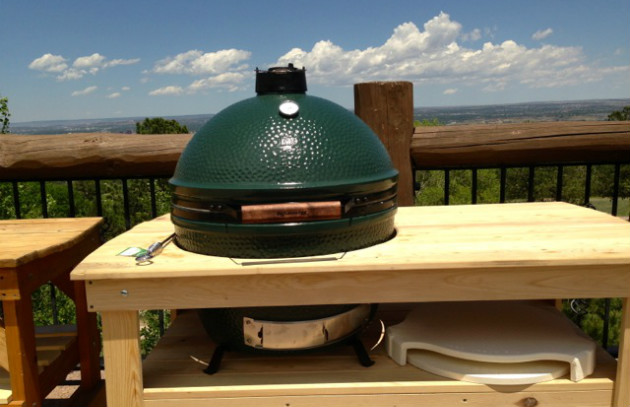 For years I’ve called them the “Moonies” of barbecue—that growing evangelical army of Big Green Egg enthusiasts who have a cult-like attachment to their green ovoid charcoal burning cookers and a messianic drive to spread the gospel of kamado cooking to every corner of Planet Barbecue.

Yes, we have several Eggs at Barbecue University™ and I own one in my personal grill collection at home. But while I use my Egg from time to time (it makes an awesome turkey for Thanksgiving), I’ve consistently regarded it as another of the many grills and smokers I use in my line of work—writing about live fire cooking around the world’s barbecue trail.

In other words, I’ve been an Egg user—not an Egg-stremist, Egg-o-maniac, or Egg-o-holic. On a recent trip to Atlanta, I decided to visit the Big Green Egg headquarters to see if I could catch the holy fire.

One thing’s for sure: there was a lot of it (fire that is) as we pulled into the parking lot. Eggs of all sizes lined the “burn area”—raised terrace to the left of the building, smoke rising from the squat steel chimney atop each. Standard size Eggs in their “nests” (steel frames). Adorable green “minis” and oversize XXLs large enough to cook for the whole neighborhood.

Presiding over them, like a priest over his congregants, is a tall, rail-thin, dark-haired man in a white polo shirt—Bruce Bohannon. He’s BGE’s head cooking school instructor with a job description that includes “customer satisfaction.” He’s the sort of guy who looks cool even in Atlanta’s triple digit heat, and he’s impatient to start my indoctrination.

Bohannon wants to cover a lot of ground this afternoon—specifically, he wants to show off how an Egg handles direct grilling a porterhouse steak; indirect grilling for chicken wings; slow smoking for brisket; and smoke-roasting for baby back ribs. The Egg has covered a lot of ground, too, from its origins in the Qin Dynasty (221–207 B.C.E.) China to Eggtober Fests attended by thousands of enthusiasts today. According to the Big Green Egg Cookbook, it began as a domed clay stove used for heating and cooking. The Japanese called it a kamado (translated variously as “oven, stove, heater,” and/or “fireplace”). Embellishments over the centuries included hanging pots, grill grates, and models you could use for cooking outdoors. American GIs discovered the kamado cooker in Japan during World War II and brought a few cookers back to the U.S.

In the early 1970s, Atlanta businessman Ed Fisher encountered one such kamado cooker. The meal cooked on it impressed him so much (“best food I’ve ever eaten,” he said), he decided to import kamados. (He already distributed another Japanese product—a sort of pinball machine called pachinko.) Fisher opened a storefront in 1974. Lacking a sales force, he relied on word of mouth to sell his cookers. An overnight success it was not.

But Fisher kept improving his kamado, first by switching from fragile clay to space-age, extreme temperature-resistant ceramics (now produced in Monterey, Mexico). The spring band hinge system made it easier and safer to open and close the heavy lid. More significantly, he decided to give his cooker a shiny dimpled surface and distinctive green color. And in a stroke of branding genius inspired by Dr. Seuss, or perhaps just by its ovoid shape, he named it the Big Green Egg.

The privately owned company won’t disclose sales figures, but claims the business has enjoyed “double-digit growth” for decades. From the original Eggtoberfest—held in Atlanta in 1997 and attended by a few hundred people, BGE festivals have proliferated across the country and around the world. (Four thousand people came to last year’s Atlanta Eggtoberfest.) Today, you can buy a Big Green Egg in 50 countries. In the event you’ve been hibernating for the last 20 years (or living in North Korea), the Big Green Egg looks exactly as the name suggests: a large upright ceramic egg with a hinged dome lid and air vents at the top and bottom. You light the charcoal in the cook chamber using a paraffin fire starter or electric heating element. You control the heat by opening or closing the vents. A cast iron grate holds the food and an optional “convEGGtor,” a heavy ceramic plate (called a heat deflector or plate setter) with three legs, sits under the grate, enabling you to indirect grill and smoke. You can buy a wide range of accessories, from rolling tables and islands to hold your Egg, to pizza stones, paella pans, and grid lifters to help you raise the grill grate.

So what sets the Egg apart from other grills and smokers? And what are its advantages and drawbacks?

Advantages of the Big Green Egg:

Drawbacks of the Big Green Egg:

But Bohannon doesn’t seem to worry about the drawbacks. “You spend the most time setting up the Egg at the front end,” he says. This means mixing the wood chips directly with charcoal. Lighting the coals in the Egg (not in a chimney starter—see below). And configuring the Egg for direct grilling, indirect grilling, or smoking. Once you’ve done that, Bohannon explains, the Egg requires relatively little intervention—even when you’re direct grilling.

This quickly become obvious. For the steak, Bohannon seasons a 1-1/4 inch thick T-bone with olive oil, salt, and pepper. He “burps” the Egg (partially opens the lid to release excess heat), then lays the steak on the screaming hot cast iron grate: 1 minute in one direction, followed by a quarter turn to lay on a crosshatch of grill marks. He sears the other side the same way, then—and here’s the part that requires a leap of faith—lowers the lid. It takes 7 minutes in all to cook the steak and it comes off the grill seared and crusty on the outside, moist and red inside, with an insanely intense charcoal flavor that isn’t quite wood smoke, but a lot more concentrated than what you’d get on a conventional charcoal grill or gas grill. It’s the first test of faith and already I hear the calling.

For the chicken wings, Bohannon sets up the Egg for indirect grilling, installing the convEGGtor under the grill grate. I note with interest he uses no drip pan. “You don’t need it—the fat drips directly on the convEGGtor, then burns off in the fire.” The wings take 90 minutes and come off crisp skinned and mildly smoky.

For the ribs, Bohannan uses the low-slow ignition method (three coals in the center, with pecan chips scattered over them). He seasons the ribs with the company’s Dizzy Pig Rub. (Tasting it on my fingertip, I detect cumin and pepper.) Once again, he uses the convEGGtor, plus a raised rack to enable him to cook a double batch of ribs on two levels. Savory bark. Moist and tender, but not soft or mushy meat. Fine ribs, although not quite as smoky as I’m used to. For the brisket, Bohannon places 3 unsoaked chunks of hickory on the coals (again, using the center light method). Cooking time will be 12 hours at 275 degrees, which unfortunately precludes my tasting the result. But I plan to do a comparison brisket test next month (cooking similarly seasoned briskets on a Big Green Egg, as well as an offset barrel smoker, water smoker, pit smoker, pellet smoker, and electric box smoker). Stay tuned for the results in a future blog.

As for dessert, well, let’s just say it involves smoked chocolate, cream cheese, and crispy crème doughnuts. Bohannon holds it in reserve in case I need a little extra persuading.

My visit to Big Green Egg certainly gave me a newfound respect for this popular and versatile cooker. It also reminded me of techniques unique to kamado cookers. But did it make me a convert? Let’s just say, I’m waiting impatiently for that UPS truck to deliver a new Egg to my test kitchen in Martha’s Vineyard.

Get 10 tips for making the most out of your Big Green Egg.