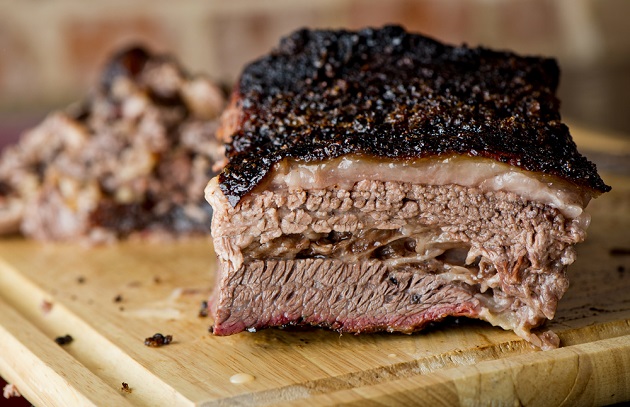 What? It couldn’t possibly be 5:00 a.m. already, could it? (I’d gone to bed around 1 a.m.) But my phone alarm affirmed it was time to face one of the biggest challenges of my barbecue life: cooking not one, but three whole packer briskets for the finale of a week-long family reunion.

And if I’ve learned anything from being Steven Raichlen’s assistant for many years, it’s this: When smoking, allow more time than you think you’ll need. Especially if tender, juicy brisket with a badge-worthy smoke ring and crusty bark is your goal. Oh, and don’t underestimate the amount of meat you’ll need.

Weeks earlier, I’d ordered two briskets totaling 27 pounds from a local butcher shop. They came Cryovaced in their own juices, so were essentially wet-aged. When I learned our reunion numbers had swelled to 39, I panicked, and was fortunately able to pick up a third brisket from a local supermarket. (This is unusual as most supermarkets only carry brisket flats—the lean part of the brisket, sans the luscious, fatty point, sometimes called the deckle.)

Going into this mission, I was definitely an armchair quarterback. I’d spent the spring and summer immersed in copy for Steven’s latest book, The Brisket Chronicles, which is scheduled for release in May. And I had a few brisket flats in my wake, not to mention experiences at BBQ University and on the set of Steven’s shows. But I’d never tackled a whole brisket by myself before.

Adding to my anxiety was the fact that I wasn’t on my home turf using familiar equipment. I had access to a Weber Smoky Mountain, but the grill grate (14.5 inches) was too small to accommodate these huge hunks of meat. So as the morning sky was lightening, I dragged my mom’s off-brand kettle grill out of the garage and lit a half chimney of coals. As Steven often says, “Sometimes, you have to go to war with the army you have—not the army you wish you had.”

Happily, my youngest brother, who lives hours away, had dropped off his electric Masterbuilt smoker with its digitally-controlled temperature read-out. (Believe me, seeing those little blue numbers approach 250 degrees in the predawn hours was a comfort!)

By 6 a.m., nearly 40 pounds of meat was bathing in wood smoke. I used soaked and drained hickory chips for both the charcoal grill and the electric smoker. 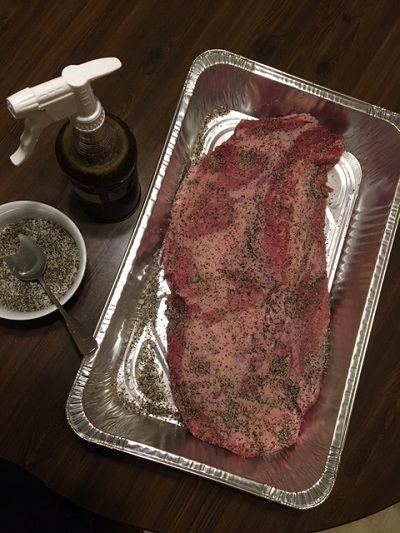 Whew! Time for some coffee, which had a dual purpose: I needed the caffeine, but I also wanted it for a mop sauce that I improvised from coffee, beef broth, and Worcestershire sauce. (I bought a food-safe spray bottle for this purpose. Though you could use an actual mop, such as the one in Steven’s Best of Barbecue line).

But we have to backtrack a bit. You can’t just throw a whole packer brisket on the grill or smoker and hope for the best.

For starters, there’s a lot of trimming to be done pre-cook. Steven offers concise instructions on how to do it in The Brisket Chronicles (they will be accompanied by photos), but to get a visual, I watched a video of brisket god Aaron Franklin of Austin’s Franklin Barbecue trimming a whole packer brisket before attempting it myself. He doesn’t like sharp edges on his brisket as he says they impede the flow of smoke. So I trimmed my briskets as if I was shaping the leading edges of airplane wings.

This admittedly resulted in some waste. In hindsight, I was overzealous, having too much fun with the incredibly sharp knife I’d bought at a discount store. (Traveling with my own knives could have added $100 to the cost of the trip.) In any case, I ended up with 12 pounds of brisket trim, which adds up when you’ve spent several dollars per pound. I saved the trim in a jumbo-sized resealable plastic bag and froze it as you can render the fat or use the meat for stock. (The Brisket Chronicles details lots of uses.)

I also made a rub of equal parts of coarse salt and pepper, which I applied the night before the cook. The salt draws out some of the moisture, giving the meat better bark. (I added garlic powder before rubbing the third brisket.)

So, back to the cook. I quit adding wood chips after the first 4 hours, though I periodically sprayed the briskets with the aforementioned mop sauce. I also transferred the supermarket brisket from the kettle grill to the electric smoker, where the other two were hanging out, which absolved me from having to light half chimneys of charcoal every 45 minutes. Now all three briskets were in one place. 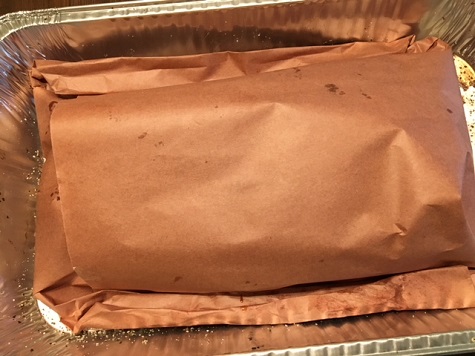 After 7 hours, the meat hit the “stall,” that place where the juices, like perspiration, accumulate on the surface and slow down heat absorption. It happens between 150 and 165 degrees. Now is the time to wrap the brisket in butcher paper. Foil can be used, too, but the permeability of unlined butcher paper makes it a favorite among pit masters. Note: Food-safe insulated rubber gloves are extraordinarily useful at all stages of the brisket process.

Once the brisket is wrapped, you can almost relax. Almost. You still have to monitor the temperature of the meat. I would have loved to have had a remote thermometer. But I didn’t. (See army comment above.) So I simply stuck the probe of a cooking thermometer into the thickest part of the meat—the point, aka deckle—to monitor the temperature. The goal was 205 degrees.

At 5 p.m.—12 hours after I started the smoking session—I packed the briskets, still in their now fat-soaked butcher paper, in a large cooler for the 20-minute drive to the lake house the family had rented. The briskets stayed there for another 2 hours, hanging out and getting even more luscious. (This resting in a cooler is an important step.)

While the brisket was languishing, I made Steven’s “Three Hots Horseradish Sauce.” I caught my cousin, a trained chef, making a layered brisket sundae of brisket, the sauce, and maybe baked beans. He slinked off before I could check.

I dutifully took photos of the entire process on my phone’s camera until . . . all of a sudden . . . everyone wanted to eat! I regret that I didn’t get a shot of the whole finished briskets, but what would you do if the peasants were at the door, brandishing torches and pitchforks? Ya, it was like that. All I had to defend myself with was an electric knife, which incidentally, works great for slicing brisket. Pay close attention to the grain; always slice against it.

At the end of the day there was less than 2 pounds of finished meat left. The family devoured it. Steven and I figure on 1 pound of raw brisket per person. But I had a couple of vegetarians in this group, and two children under the age of five. So I think our rule-of-thumb number is spot-on. 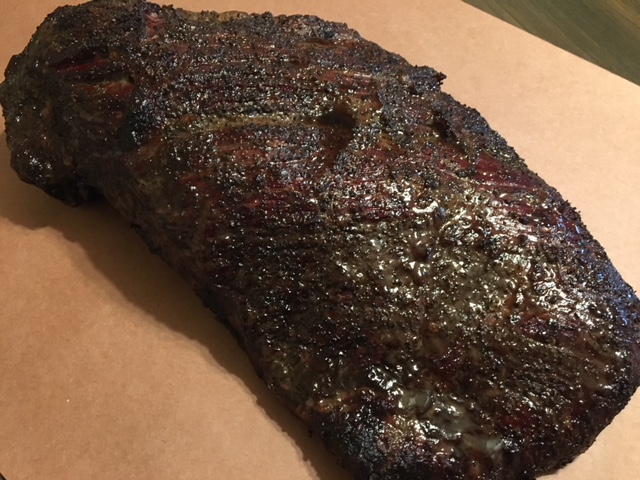 Here is a summary of takeaways from my first whole brisket experience:

Have any first-time brisket tips? Tell us about it in the comments or on Facebook, Twitter, or the Barbecue Board.