Chicken Wings of the World

Chicken wings are one of my favorites. They are great as an appetizer or a meal, depending on how many you eat. And there are so many creative ways to cook and flavor wings. Most people have a favorite cooking method and favorite seasoning or sauce for their wings. I find the most difficult part of making wings is deciding what style or flavor to make.

My wife and I discussed our menu for the recent Super Bowl; we agreed on wings. I struggled to narrow down my choices, so I made wings three ways.

Here are the preparations I decided on and the tasty results. Think of this as “Wings of the World.”  Each wing style comes from a specific part of Planet Barbecue and has its own story.

One of my favorites is also one of the most famous wings…Buffalo-style. Wings in a peppery hot sauce started at the Anchor Bar in Buffalo, New York, in 1964. Co-owner Teressa Bellissmo cooked wings (free from her meat supplier) in hot sauce for her college-aged son and his friends. The late-night snack was added to the menu the next day and the “Buffalo” wing was born. The Super Bowl was the perfect opportunity to make my own Buffalo wings.

The second batch of wings were flavored with a teriyaki and tangerine marinade.  While working as the fire wrangler on Season 2 of Project Fire, I watched Steven make Teriyaki Tangerine Chicken. It looked and smelled delicious: I knew I wanted to try this when I got home. I first put the marinade on chicken thighs, but knew it would be great on wings. The marinade is a fusion of Asian and Caribbean flavors.

The inspiration for the Salt and Lemon Pepper Wings with Chimichurri Sauce came from a cooking failure. Recently, I tried to make salt-crusted wings just as cookbook author and celebrity chef Francis Mallmann would do with a whole chicken or fish on an infiernillo. I seasoned the wings with lemon pepper, encased them in a salt crust, and cooked them in a Big Green Egg XL for about an hour. The wings were way too salty, but I could see how the flavors would work on wings without the crust. I think of these as Argentinean wings. 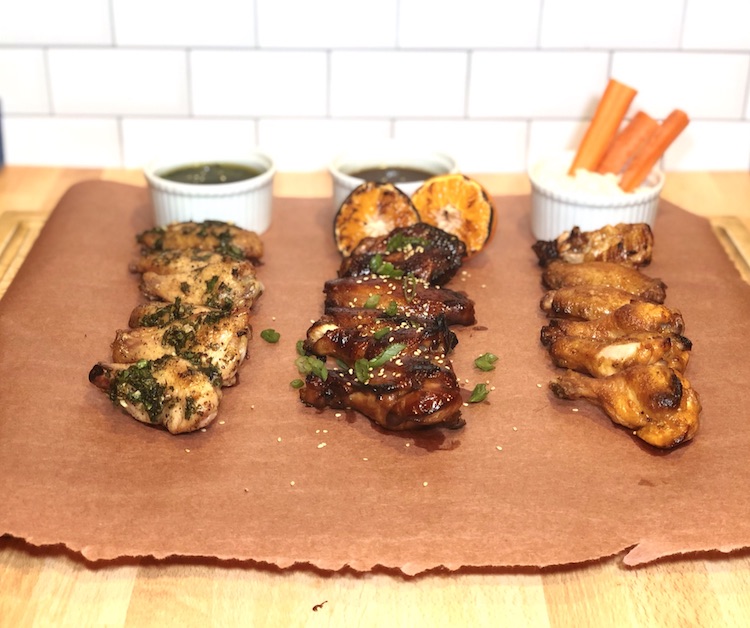 To prepare the three versions of wings, I separated whole wings into flats and drumettes (discard the tips or save them for stock), and then divided them among resealable plastic bags. The marinade or seasonings were added to the wings and then they were refrigerated overnight.

The Buffalo marinade consisted of homemade hot sauce (or you can use your favorite Louisiana-style hot sauce), Worcestershire sauce, lemon juice, pepper, garlic, and white vinegar. Use Steven’s Buffa-Que wing recipe as a guide. All ingredients were mixed in a bowl and then poured over the wings in the bags.

The teriyaki tangerine marinade was made as is detailed in Steven’s recipe.

The Salt and Lemon Pepper Wings were seasoned with kosher salt and homemade lemon pepper seasoning. I used the lemon pepper since I like to use lemon juice in my chimichurri instead of vinegar. It adds a bright acidic freshness to the chopped herbs in the chimichurri.

I set-up a kettle grill for indirect grilling and heated it to medium-high. The high temperature crisps the skin on the wings. While the wings cooked, I prepared the chimichurri. I finely chopped fresh parsley, oregano, and garlic. I then added the zest and juice of 2 lemons and mixed in olive oil. The Buffalo glaze was made by melting a stick of butter and adding ½ cup of the Buffalo-style hot sauce. The teriyaki tangerine marinade is strained and then boiled for 10 minutes until it reduces to a syrupy consistency. I basted the wings with their specific sauce or glaze 30 minutes into the cook. The second baste was at 40 minutes, and the wings were removed at 45 minutes.

Now for the results. I enjoyed them all and it was hard to pick a winner.

The Salt and Lemon Pepper Wings were the crispiest of the wings. The crispy skin created a great bite contrasted with the juicy inside. The herbs and lemon in the chimichurri added a boost of freshness to the wings.  I will definitely make these again.

The teriyaki tangerine wings started to take on a dark color from the marinade. The wings developed a caramelized exterior that become more intense as the wings were basted. The  tangerine juice and the aromatics created a fragrant aroma. The honey, soy sauce, and the bronzed skin created the perfect sweet, salty, crispy, and luscious bite.

I struggled to pick a winner. I had not made Buffalo wings in years and was really looking forward to trying the wings with the homemade blue cheese sauce. The salt and lemon pepper wings were so crispy, flavorful, and nothing like my salt-crusted failure. The caramelized sweet-salty exterior took the teriyaki-tangerine wings over the top.

And the winner was? My wife’s favorite was a total surprise…the Buffalo wings with the blue cheese dressing. I will make each of these wings again, but my big win was that my wife is now a Buffalo wing fan! I challenge you to experiment with a new cooking method, try a new marinade, or a new spice rub the next time you make wings.