Tailgating with the Ooni Pizza Oven 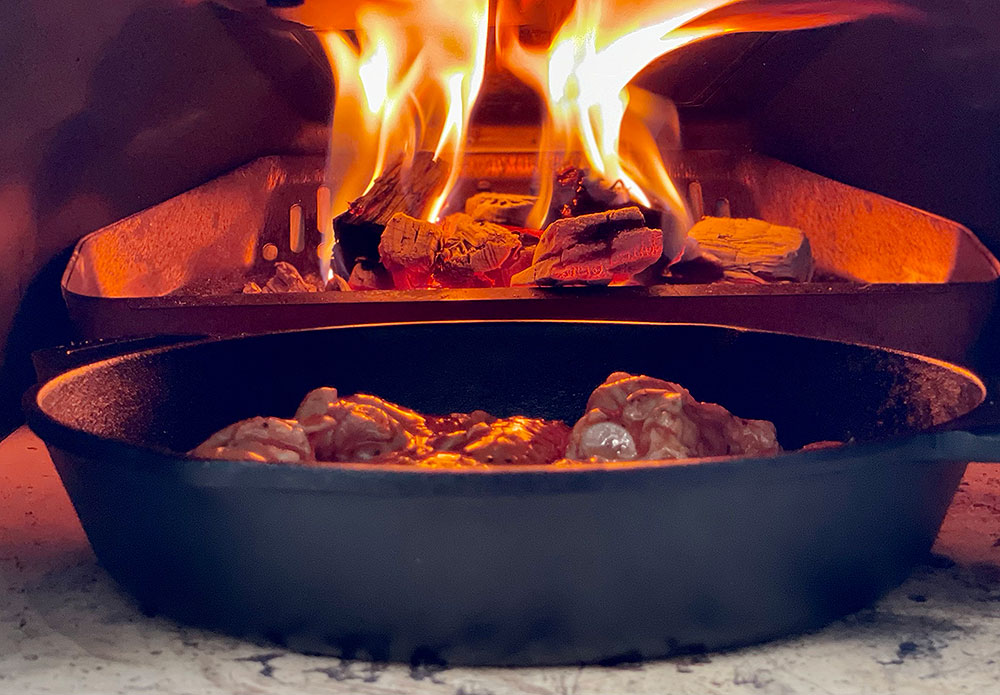 Tailgating is no longer just burgers and dogs! Tailgaters take their food seriously, and I wonder if some people are there more for the food than the game? When I walk around the parking lot before a New England Patriots game I see the usual burgers, dogs, and steak tips on the grill. But in New England, people love their seafood just as much as they love their football team.

In New England, it is normal to see people boiling and grilling lobsters, making clam chowder (chowdah), shucking oysters, grilling scallops and shrimp, and even steaming crabs. It’s not your average tailgate. So, how can you take your next tailgate to the next level?

In my two previous blogs on the Ooni Karu 16 Multi-Fuel Pizza Oven I shared how to make pizzas in minutes and how to use the oven for a teriyaki salmon bite appetizer and make wood-fired lobster tails. Today, I going to share how you can use your Ooni pizza oven to elevate your next tailgate.

Tailgating with a Pizza Oven

To stick with the seafood theme, I went with one of my favorite Steven Raichlen recipes for clams. I put a twist on Clams Steinhatchee by cooking them in the Ooni. 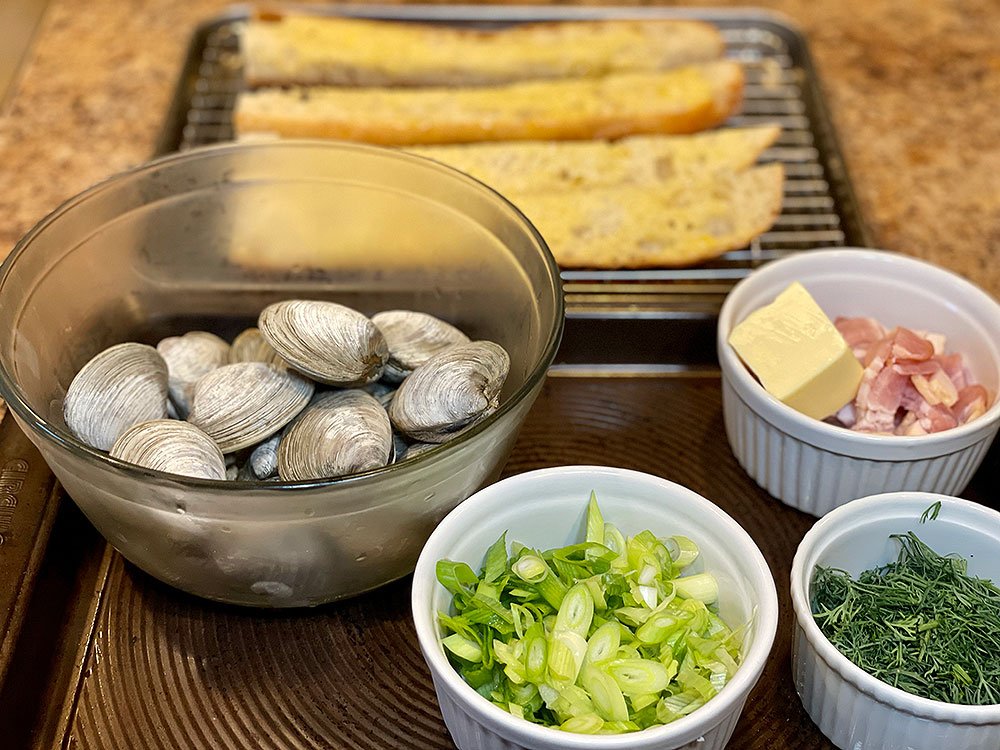 I started by heating the oven to 450 degrees and then I preheated a 10-ich cast iron pan. This time I was cooking with a combination of charcoal and wood. I used lump charcoal to get a fire going in the pizza oven and then added wood chucks to keep the fire going. My goal was to keep the temperature around 450 degrees, but the temperature spiked depending on how long I had the oven door open. 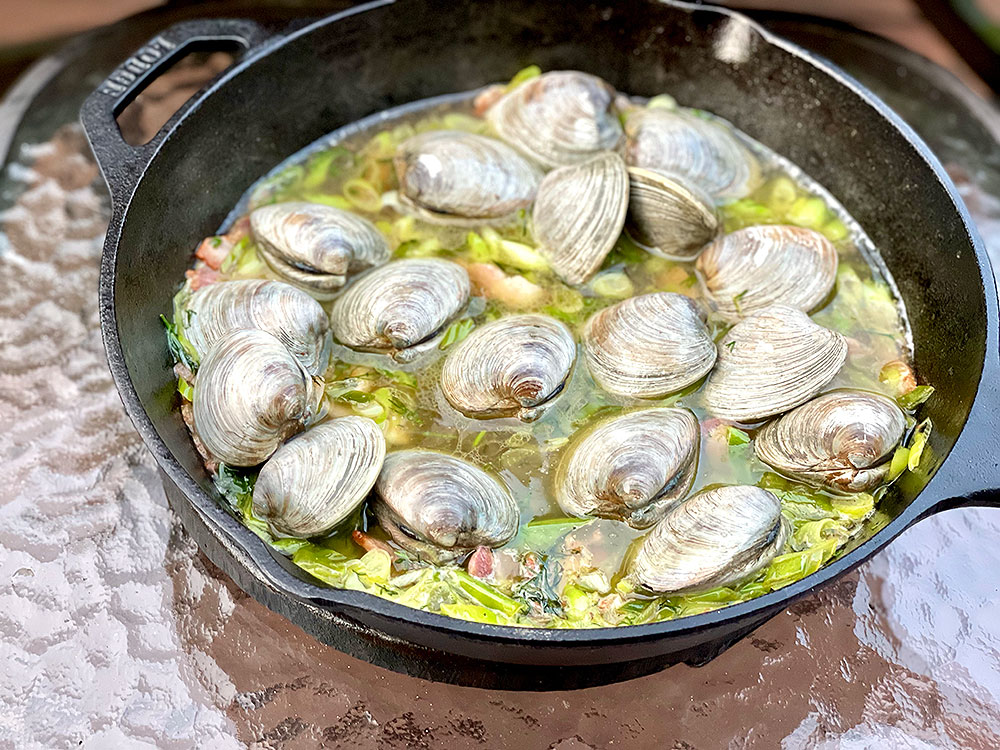 While the oven heated up, I prepped all the ingredients and washed the clams. I changed some of the quantities in Steven’s recipe since I was cooking less clams.

I added butter and slivered bacon to the preheated cast-iron pan and returned it to the oven. Once the bacon started to crisp up, I added the scallions and dill. I let the scallions cook for 30 seconds in the oven and then I added a cup of white wine and returned the pan to the oven. I should have only used 1/2 cup of wine for the number of clams I was cooking. Don’t be alarmed if you see flames coming from the pan; it is just the alcohol burning off. Once the wine came to a boil, which I could see through the window of the oven door, I added the clams. I knew the clams were done once they opened. No thermometer necessary. 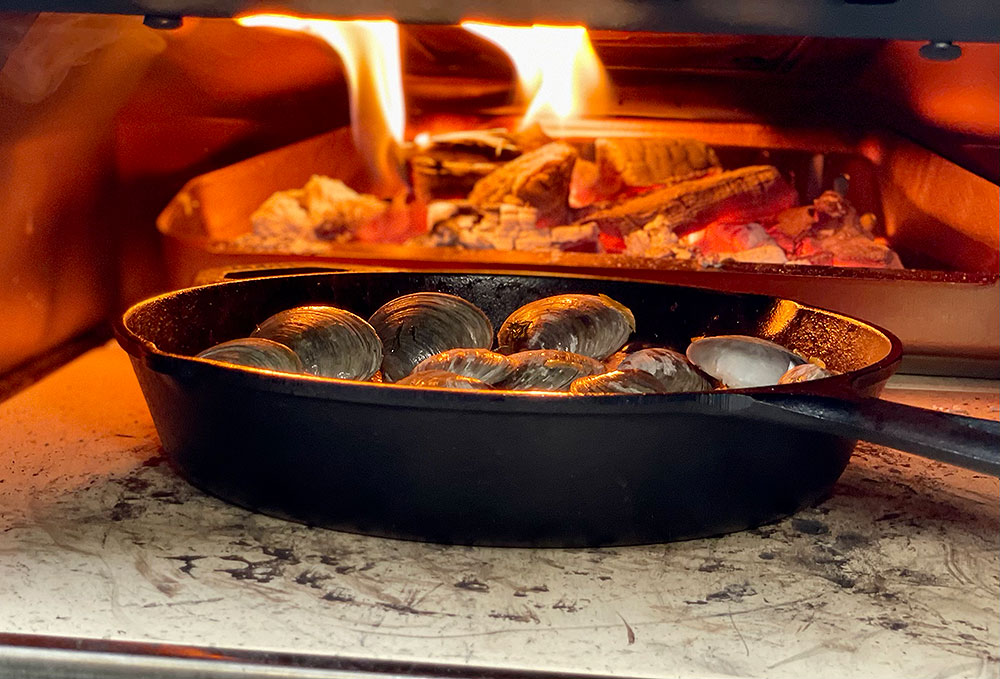 The clams were garnished with more dill and served with breadsticks I cooked in the pizza oven. 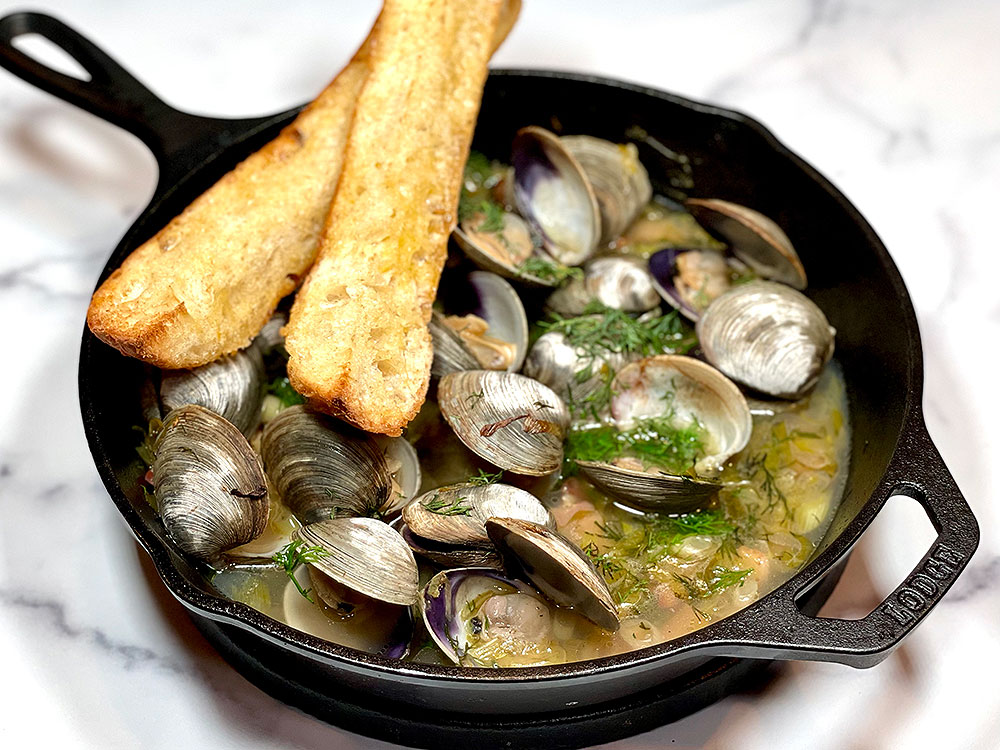 The clams were tender and developed complex flavors due to the bacon, the wood fire, the wine, and the scallions. The clams had a smokiness due to the bacon and the wood fire. The juice from the clams released into the broth and created a subtle salty-briny flavor. The scallions and the dill provided a fresh element to the dish. The crusty breadsticks were perfect for soaking up the flavorful broth.

Try this one-pan clam appetizer to impress your guests at your next tailgate. But, if shellfish is not your thing, here is another tailgating classic…buffalo wings.

I followed the recipe on the Ooni website for the wood-fired buffalo wings. It starts with a buffalo sauce. Once you make the sauce, reserve one-quarter of it for basting the wings. Toss the wings with the sauce and let them marinade in the refrigerator for an hour. I heated the oven to 475 degrees and preheated a cast-iron pan. Once the pan was hot, I lightly oiled it to keep the wings from sticking. I placed the wings in the cast-iron pan in a single layer and cooked them for 10 minutes. I basted the wings with the remaining buffalo sauce and cooked for an additional 8 to 10 minutes. I served the buffalo wings with Steven’s blue cheese sauce. 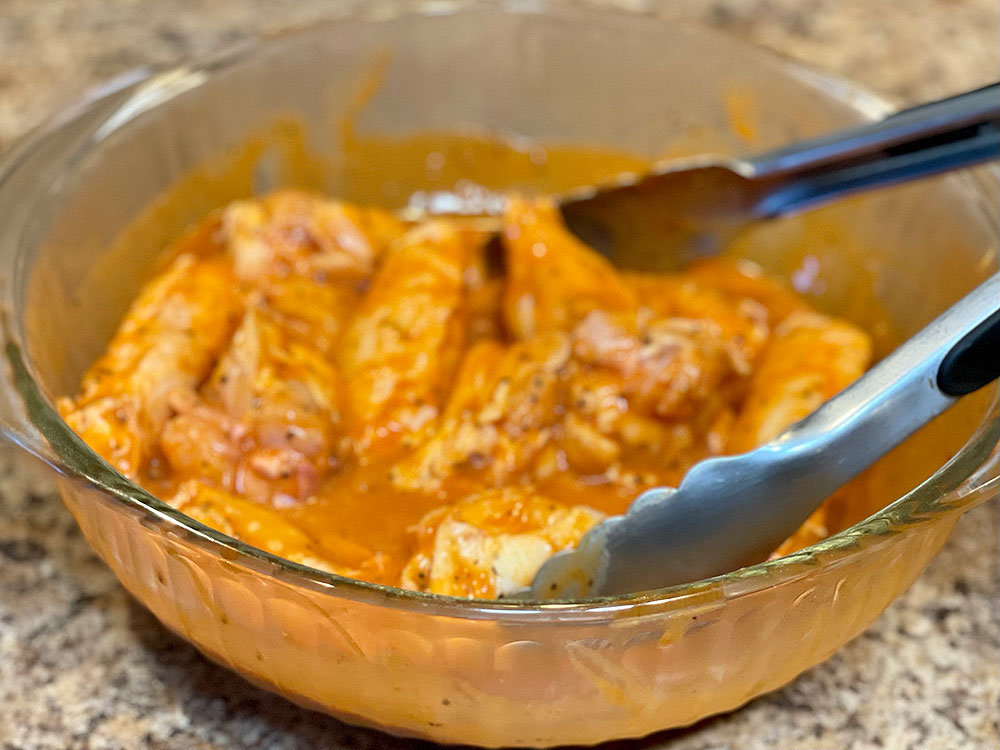 The wings were crispy and had a smoky aroma due to the wood fire in the oven. The wings were tender and juicy on the inside. The high heat of the oven created a crusty exterior on the wings. My wife doesn’t usually like spicy food, but even she enjoyed the mild buffalo flavor. Feel free to kick up the spice if you like your wings “hot.” The blue cheese was the perfect match for the wood fired-wings and may be necessary if you kick up the heat on your wings.

Once the wings were done, I added additional wood chunks to the oven to raise the temperature to cook a pizza. Buffalo wings and wood fire- pepperoni pizza are the ultimate tailgating combination. 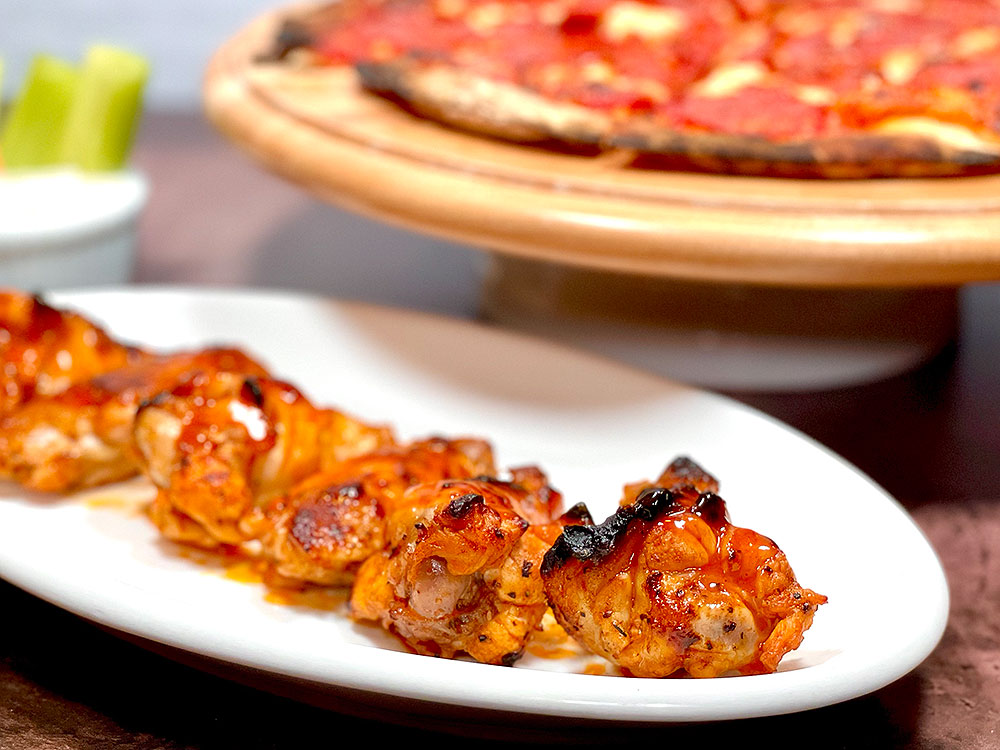