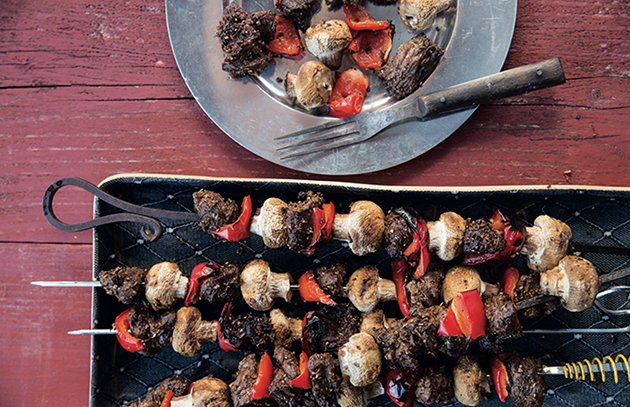 Guest blogger Paula Marcoux—a former culinary historian at Plimoth Plantation in Massachusetts—recently published a fascinating book on live fire cooking around the world called Cooking with Fire. It’s certainly one of my top ten grill books of the year. I asked Paula to share her thoughts about one of the world’s most ancient and universal grilled dishes: kebabs.

One of the sweetest cooking tools I’ve ever seen is an earthenware kebab holder, really a pair of little pottery firedogs, made to support meat-bearing skewers over hot coals. From the ridges meant to hold the kebabs just so, to the holes perforating the sides to allow proper airflow to the embers, to the cute little animal head finials, this unit is ideally designed for its job. The potter even thoughtfully provided lug handles on the cool outer face of each support for easy maneuvering. Where can you get yours? Well, this one is in a museum case in Crete, after spending 3,700 years under volcanic ash at the ancient Minoan site of Akrotiri. That’s right—it’s 3,700 years old! And people have been enjoying kebabs a lot longer than that. It’s clear why kebabs are persistently popular—they’re delicious, versatile, and economical. By showing a lot of surface area to high heat, the kebab’s uniformly cut bits of meat, fish, or vegetables cook quickly and develop great seared flavor. All that exposed perimeter also makes for even seasoning and the transfer of complementary flavors between foods.

Historians peg Central Asia as the kebab’s homeland and today every region, every village, it seems, has a signature treatment, many stepping outside of stereotypical kebab boundaries. This vast range includes finely minced seasoned meat applied around a flat sword-like skewer, slices from a stack of lamb and lamb fat roasting on a spit, and even lamb and fixings sealed and ember-baked in a clay pot. I loved every kebab I ate in central Turkey, finding the variations in plating and garnishing mind-boggling and fiendishly delicious. The sizzling meat arrived at the table on large pebbly-textured flatbreads with contrasting sauces involving garlicky yogurt, simmered tomatoes, and butter infused with sumac or Aleppo pepper or dried mint.

Today, kebabs are truly global—from lemon and garlic marinated chicken hearts in Brazil, to shallot, chile, and soy inflected mutton satay in Indonesia. Whatever flavor-principle draws you, here are a few technical pointers to set you on the path to enjoying your own kebab tradition. And to further facilitate your kebab making, check out these useful products in the Barbecue Bible store:

ENTER TO WIN COOKING WITH FIRE: