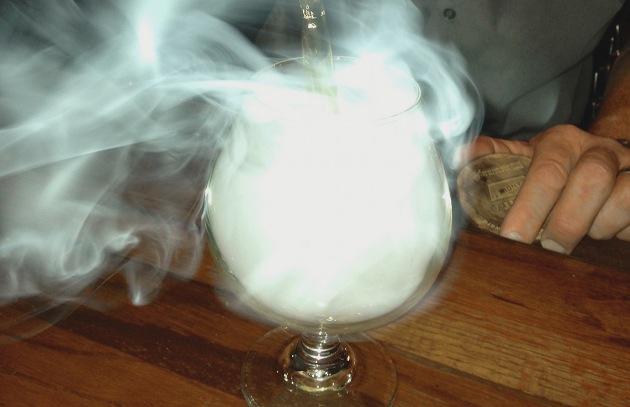 2015 already? Seems like I just sat down to write last year’s predictions. Many came true, like really big steaks and cocktails get smoked.

So here’s a look at my crystal ball for Planet Barbecue 2015. I write these words on a flight from Los Angeles to Miami. Which brings me to my first trend, for California often sets the agenda for grilling and American gastronomy in general.

Wood-burning grills invade high-end restaurants: It used to be that grill restaurants were destinations in their own right. Now highfalutin Spanish, Italian, and even French restaurants are installing wood-burning grills to cook dishes that once were sautéed or baked in the oven. The new Cadet in Santa Monica grills lemons to accompany ember-roasted cod and heritage pork chops. King + Duke in Atlanta and Miller’s Guild in Seattle built their menus—and kitchens—around high-end wood-burning grills from Grillworks. Yes, that’s the same wood-burning grill we use at Barbecue University™. ’Que goes green: Used to be that no one questioned the provenance of the brisket or pork butt. At the New Wave barbecue joints, where the meat comes from matters as much as how it was smoked. The new Barrel & Ashes in Los Angeles (Studio City, to be precise) serves Mary’s free-range chicken. Hometown Bar-B-Que in Brooklyn smokes Cheshire pork from Heritage Farms. More and more of us—even diehard barbecue buffs—are embracing the Michael Pollan ethic: We want to eat meat from animals raised humanely—preferably by local famers—and without growth hormones and antibiotics. At my house, we pretty much grill only grass-fed beef, organic chicken, and local shrimp with heads intact. And we don’t smoke or grill salmon until we can get it wild from the West Coast. Side dishes move center stage: Remember when sides at barbecue joints were afterthoughts? Wonderbread straight from the plastic bag? Canned three bean salads? The same connoisseurship that has improved the wholesomeness of our barbecued meats demands worthy side dishes. Tom Micklethwait at the awesome Micklethwait Craft Meats in Austin, Texas, bakes his own bread for his sandwiches. Rob Magee at Q39 in Kansas City, Missouri, upscales traditional baked beans with his white bean cassoulet. Mighty Quinn’s Barbeque in Manhattan serves a bean salad made with snap peas and edamame. Beef ribs are the new spareribs: Maybe it was the monster beef ribs at the new Pecan Lodge in Dallas, Texas. Or the equally imposing smoked, grill-sizzled beef ribs at Butcher & The Boar in Minneapolis, Minnesota. Or the “brontosaurus” ribs at Mighty Quinn’s in New York City. Or coal-black beef ribs at La Barbecue in Austin, Texas—so humongous, you need both hands to raise them to your lips. The beef plate rib (each weighs in excess of 1 pound) has become the it barbecue at smoke palaces across the U.S. Think the meatiness of brisket and gnaw-ability of spare ribs, and don’t think of firing up your smoker at home without trying it. Everything you need to know about beef ribs here. Tailgating comes home: It was bound to happen. As Americans started to grill weeknights, not just on special occasions (Raichlen’s prediction for 2013), as we came to own multiple grills and smokers (Raichlen’s prediction for 2014), our backyards became outdoor kitchens and dining rooms (make that full-on entertainment centers). The experts call it “home-gating”—the same friendly competitive spirit, the same elaborate meals as tailgating—but with the convenience (and better tableware) of entertaining at home. Enter grill-to-table serving platters, like the Best of Barbecue Grilling Plate. Smoke, smoke, and more smoke: Maybe I’m biased (my next book and TV show are on smoking), but I predict the new year will bring more smoking and more smoke flavor in foods you’d expect (brisket, ribs, pork shoulder) and foods you don’t (like cocktails, soups, eggs, and salads). We’ll be buying more smokers and smoking accessories, like the Smoke Daddy (a charcoal-fired smoke generator) and Smokenator (turns a kettle grill into a smoker). And turning to high-tech devices, like the Smoking Gun, to smoke everything from cocktails to coleslaw to cheesecake.

Wood, wood, and more wood: If smoke is the soul of barbecue, wood is the soul of smoke. In the coming year, we’ll be using wood more than ever before. Wood for grilling in wood-burning grills like the Char-Broil CB940X and Grillworks. Wine barrel staves and olive wood chunks for enhancing charcoal and gas grill sessions. Single varietal woods for smoking—like maple and cherry. Smoking wood blends, like my Best of Barbecue pork blend (hickory and apple) and beef blend (mesquite and oak). Barbecue goes high-tech: Few of us could manage daily life without our smartphones. More and more of us will come to rely on high-tech electronics to help us take barbecue to the next level. Thermocouple meat probes and remote thermometers to tell us the exact internal temperature of our prime ribs or pork loins. (Some favorites include the PitmasterIQ, the PartyQ and Oregon Scientific meat thermometer.) Digitally operated micro-blowers to regulate the temperature of a Big Green Egg or Weber Smokey Mountain to the precise degree. Sausage is the new bacon: After a decade of growth, bacon mania seems to be … I can’t say waning … but perhaps leveling out. (The latest bacon trend: curing and smoking your own, then using it to make a bacon weave.) I predict that 2015 will become the year when sausage goes global, viral, and haute. New sausages, like Argentinian longaniza and Portuguese linguica, will join such American classics as Italian sausage and Wisconsin brats. (Here’s a guide to global sausages.) We’ll use new tools, like sausage grilling baskets, and new techniques, like smoke-roasting, to serve grilled sausages that are neither raw in the center nor burnt. Pizza hits the grill: Grilled pizza has been around for a long time. (I first wrote about it in The Barbecue! Bible in 1998.) What is new is the proliferation of specialized accessories for cooking pizza on the grill. Pizza stones that give you the audibly crisp crust you get from a wood-burning pizza oven. Peels that help you transfer the pizza from the rolling board to the grill and back. Pizza cutters that make slicing your grilled pizza a snap. Whole dome-shaped pizza oven attachments that turn your kettle grill into a wood-burning oven. And free-standing portable gas-fired pizza ovens like the Pizzacraft Pizzeria Pronto that achieve temperatures of 700 degrees in 5 minutes.