Celebrate Juneteenth with a Barbecue 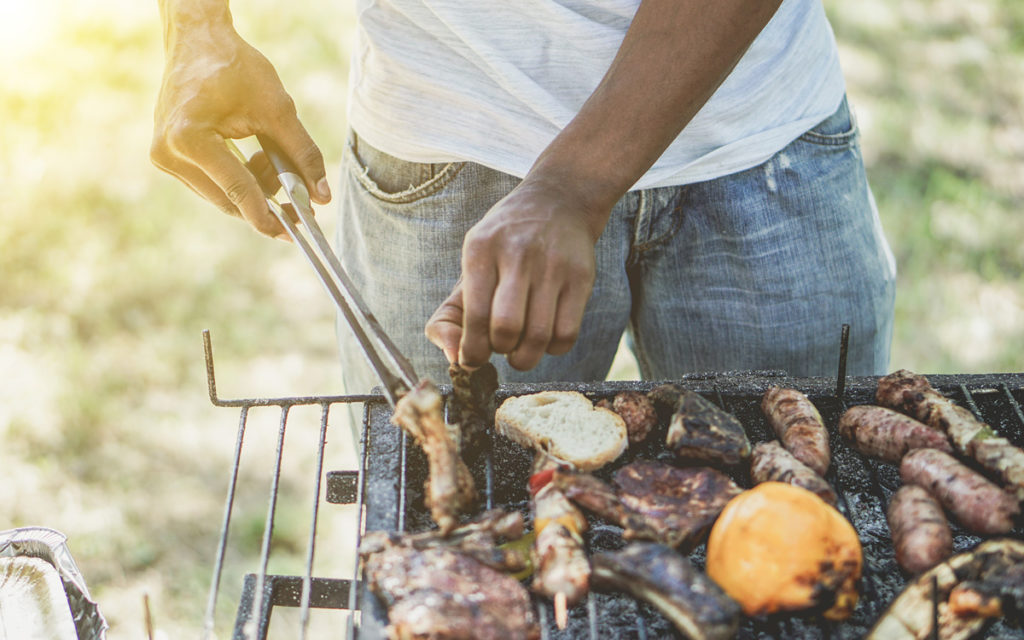 Today is “Juneteenth,” a neologism that combines the words June and nineteenth. It marks the anniversary of the day in 1865 that Union-backed Major General Gordon Granger and his regiment arrived in Galveston, Texas, bearing momentous news: By order of the Emancipation Proclamation, all enslaved persons within the Confederate states were declared free.

Students of history will recall that President Lincoln actually signed the order in 1863. But Texas was still under Confederate control, and as a result, enslaved people would not be free until much later. At that moment, its delinquent arrival mattered not: A spontaneous celebration erupted in the streets of Galveston, still the epicenter of Juneteenth festivities.

Also called Jubilation Day, Freedom Day, and Emancipation Day, Juneteenth is recognized as an official holiday or a day of observance by 49 states and the District of Columbia. It is celebrated primarily (though the 2020 festivities are expected to be more multicultural) by Black families with parades, speeches, fireworks, picnics, reenactments, and of course, barbecue.

Certain foods became popular and subsequently synonymous with Juneteenth celebrations such as strawberry soda-pop. More traditional and just as popular was the barbecuing, through which Juneteenth participants could share in the spirit and aromas that their ancestors – the newly emancipated African Americans, would have experienced during their ceremonies. Hence, the barbecue pit is often established as the center of attention at Juneteenth celebrations.

In addition to such barbecue staples as smoked meats, potato salad, macaroni and cheese, and baked beans, a traditional Juneteenth menu also features red foods: They not only symbolize blood shed during the struggle for freedom and equal rights, but strength and courage.

Although public celebrations will be different this year due to the Covid-19 virus and the Black Lives Matter movement, commemorative events have been planned in cities and towns throughout the U.S. Check local news sources (including community websites) for specific information, or visit the National Registry of Juneteenth Organizations and Supporters.

Or…if you’d like to mark the holiday at home in the safety of a smaller group, here are recipes you and your friends and family will want to add to your repertoire. Happy Juneteenth!

12 BBQ Recipes for a Juneteenth Celebration

Beer and Gulf Coast oysters are an integral part of Galveston’s food culture. Anointed with barbecue sauce and pepper Jack cheese—you can even dribble a little tequila over each one—will get the party started.

Buttermilk brined chicken wings seasoned with a homemade lemon pepper rub and grilled to perfection before basting with a lemon butter glaze.

These sweet, spicy and smokey Jamaican jerk wings come from an authentic Jamaican family recipe. Learn how to make the best jerk seasoning.

Hibiscus tea was served at the first Juneteenths, and red-colored beverages have been the norm since. This sangria, made with grilled citrus fruit and fizzy Lambrusco, has been a favorite at Barbecue University (going on now at the Montage Palmetto resort in Bluffton, South Carolina) for several years. Cheerwine—a supernaturally red soda pop from North Carolina—is a great nonalcoholic substitute. 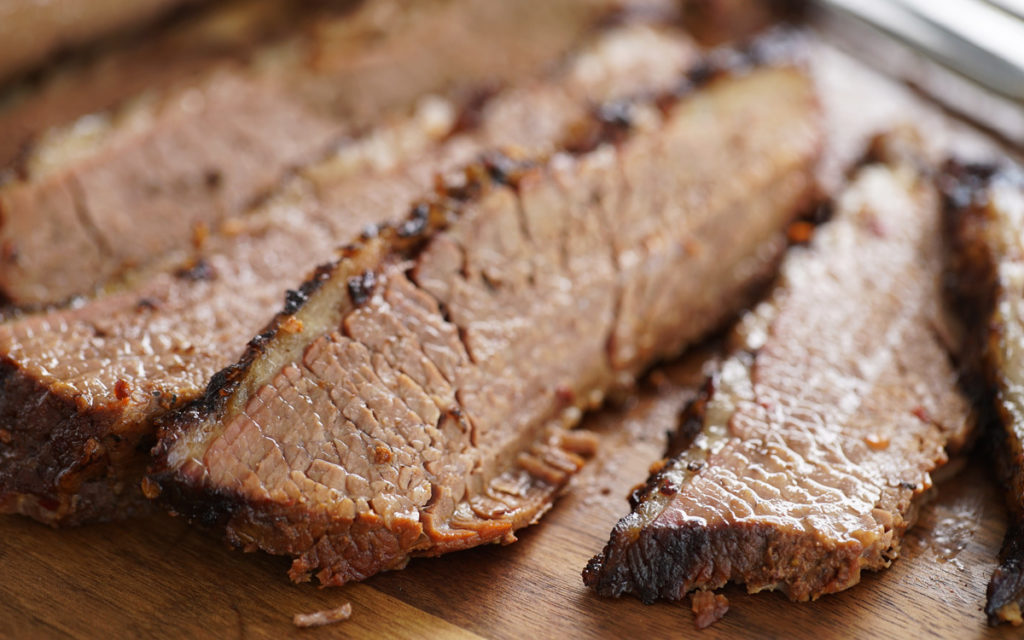 Nothing says Texas barbecue like beef brisket. This one is seasoned simply with coarse salt, pepper, and hot red pepper flakes, then draped with bacon to keep the flat (leaner than the brisket point) moist.

7. Black-Eyed Peas with Smoked Turkey from My Fabulous Food

Black-eyed peas with smokey turkey are the perfect soulful side dish for any Juneteenth celebration. Pair this amazing side dish with white rice and cornbread to tantalize your tastebuds. 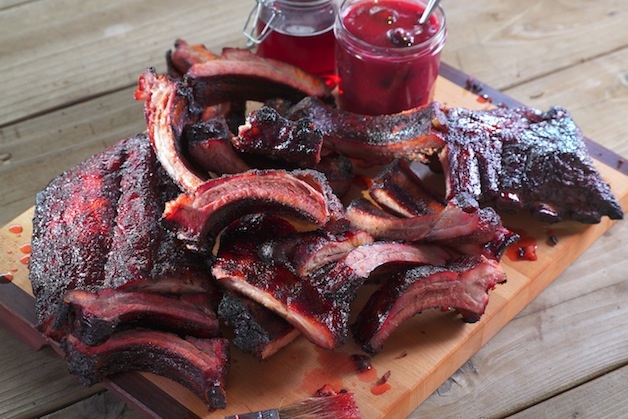 Continuing the red theme, these ribs are a great alternative to brisket if you’re short on time or just have a taste for pork.

9. A New Macaroni and Cheese (with Grilled Onions, Chiles, and Corn) 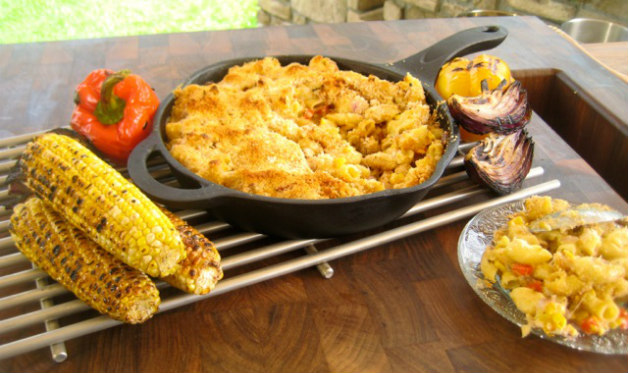 One of the most popular recipes on our website is this Southwestern-inspired version of good ol’ mac ‘n’ cheese. It might be the hit of your Juneteenth celebration.

If you’re craving a healthier version of peach cobbler, try these Spiced Grilled Peaches with a dollop of vanilla ice cream! 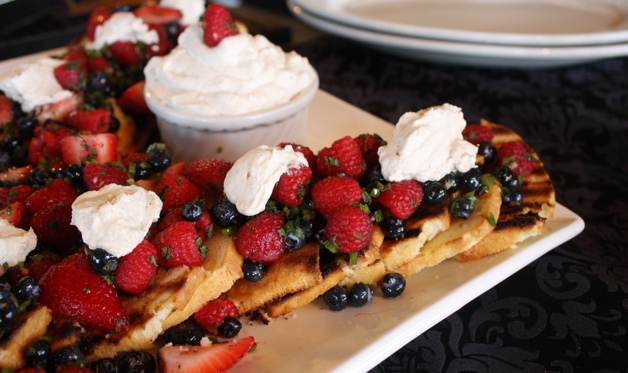 12. Strawberry Cornbread Skillet Cobbler from Meiko and the Dish

a bright crimson blend of juicy summer strawberries, mint, and citrus nestled under a bed of pillowy golden cornbread. This cobbler is delicious and ridiculously easy to dish up making it the perfect contribution for all summer gatherings.

For more recipes, check out the 2020 Juneteenth Cookout Takeover, an initiative to encourage the celebration of Juneteenth and to amplify the food traditions of black culinary creatives.