Seoul Food: Pork Belly Breaks Out of the Bacon Mold 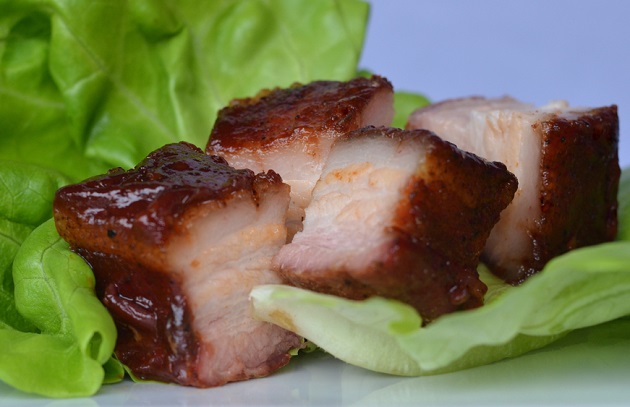 In 2004, the small food, wine, and travel publication I worked for devoted an issue to Korean-style barbecue. Little had been written about this cultural phenomenon, and we were confident our readers would share our excitement. We worked hard for weeks, our research culminating in a soju-soaked food crawl through L.A.’s Koreatown. We were guided to the best markets and barbecue restaurants by a hip young Korean-American named Jonathan Kim. (He went on to found one of the largest Asian food emporiums in the U.S.)

Long story short, we were hit with a barrage of cancellations once the issue was released. No kimchi before its time, I guess.

More than a dozen years later, Americans are much better acquainted with Korean barbecue—usually beef dishes such as bool kogi/bulgogi (thin slices of beef, marinated then grilled) or galbi/kalbi (grilled cross-cut short ribs).

But the king of Korean barbecue is skinless pork belly, that striated union of unctuous fat and seductive pink meat whose origins on the animal—unlike pork butt—are straightforward. We know it as bacon, though like pancetta, the Korean version is uncured.

Called samgyeopsal, which translates to “three-layered meat,” rasher-like strips of pork belly are eaten at least once a week by 85 percent of native Koreans. It is typically grilled quickly on a round tabletop grill, then wrapped in a lettuce leaf with an array of fresh and pickled condiments collectively called panchan/banchan. (By the way, it’s nearly impossible for a Westerner to correctly pronounce the words on a Korean menu. The vowels and consonants have much different sounds than those used in the Romance languages. And as you’ve probably noticed, different spellings for the same dishes abound.)

Among the many beautiful things about Korean-style pork belly is that it’s so easy to make, perfect for weeknight cooking, and conforms (sans rice) to the Paleo Diet. The biggest challenge may be finding the belly at your local market. Steven and I have been successful finding it at Whole Foods, but many supermarkets are beginning to carry it due to its newfound popularity. Call ahead to make sure they have it or can get it for you.

So simple, samgyeopsal doesn’t even need a recipe:

• Slice chilled skinless pork belly into strips, anywhere from 3/8- to 3/4-inch thick. There’s no need to marinate it or subject it to a wet or dry cure, though I do like to apply a rub, such as Steven’s 5-4-3-2-1 Asian Barbecue Rub just before grilling.

• Set up your grill (charcoal or gas) for direct grilling and preheat to medium-high. Brush or scrape the grill grate clean and oil it well with vegetable oil or a chunk of pork fat clasped in tongs. A hibachi is as close as most of us can come to the small tabletop grills used in Korean homes and restaurants.

• Arrange the strips of pork belly on the grill grate and grill, turning as needed, until done to your liking. If flare-ups occur—the fattiness of the meat almost guarantees that they will—move the pork belly to the safety zone until the flames subside. Tip: You can use a long-handled grill basket like this one to hold the pork belly, enabling you to react quickly if the fire gets too excited.

• Transfer the pork to a cutting board. If the strips are thin, use a kitchen shears to snip them into bite-size pieces. If they are thicker, slice them into 3/4-inch cubes with a sharp knife. Transfer to a platter or plates.

• Serve sizzling hot with leaves of butter lettuce (sometimes called Boston lettuce) or tender hearts of romaine as well as any or all of the following: homemade KB (Korean Barbecue) Sauce  or your favorite hot sauce or dipping sauce; thinly sliced cloves of garlic; thinly sliced green chiles; kimchi (purchased or homemade); or thinly sliced scallions. Steamed white rice rounds out the meal. Beer, Korean soju (an alcoholic beverage distilled from rice or sweet potatoes), sake, or even a dry Riesling go well with the pork.

• To eat, tuck a piece or two of pork belly into a lettuce leaf, add your favorite condiments, and pop the package into your mouth.

Variation: Though not strictly authentic, I like to glaze the pork several times as it cooks with a sweet-salty soy sauce-based sauce like this one: In a small saucepan on the stovetop or on the side burner of your gas grill, bring to a boil 1/2 cup each water, soy sauce, mirin, and soju or sake, as well as 1/4 cup of sugar, several slices of fresh ginger, and 3 smashed cloves of garlic. Remove the glaze from the heat when it thickens slightly. Use a basting brush to apply the glaze to the meat. In a pinch, you can substitute a good-quality teriyaki sauce.