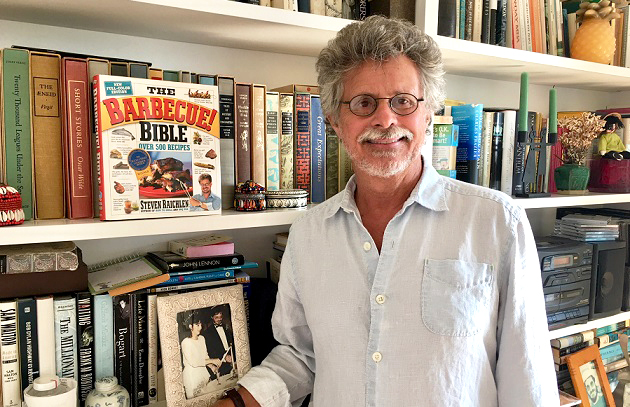 If you happen to visit the Smithsonian Museum of American History, you’ll find an exhibit on a uniquely American institution: the backyard barbecue.

And if you happen to tour that backyard barbecue exhibit, you will see, next to James Beard’s Complete Book of Barbecue & Rotisserie Cooking (published in 1954), and the Sunset Barbecue Cook Book (1958), a book near and dear to my heart: The Barbecue! Bible, written by yours truly and published by Workman in 1998. Which makes this the 20th anniversary for the book that got me into barbecue. (Yikes—two decades have passed already?!)

And an unexpected but much appreciated honor for a book that wasn’t supposed to be called Barbecue Bible at all.

So in case you’re wondering, here’s the backstory to the book that changed my life—and I hope changed yours.

The year was 1994. I had recently moved to Miami and written my first book for Workman Publishing, Miami Spice. I was also still writing about high flavor-low fat cooking (does anyone remember those books?) in an effort to remedy a cholesterol problem I developed during my decade as the restaurant critic for Boston Magazine.

It was early November—one of those luminescent days in Miami when the summer humidity is finally gone. If memory serves, I was sitting in an Adirondack chair, wearing a white shirt and blue shorts. Time seemed to slow down, as it does at those mysterious turning points in life. I heard a voice, and it commanded me to “follow the fire.” Well, maybe it was less of a voice than a sudden realization. That grilling is the world’s oldest and most universal cooking method. But everywhere people grill differently. My mission would be to travel the world’s barbecue trail and document how people grill in different cultures. I dashed off a book proposal. My publisher, the late visionary Peter Workman, saw the possibilities. A short time later, I had a contract to embark on the greatest writing adventure of my life.

What started as a relatively modest book—1 year, 10 countries, 100 recipes—became an editorial monster. By the time I turned in the manuscript 4 years later, I had traveled more than 150,000 miles on 6 continents, and my modest 100 recipes grew into a 500+ recipe, 556-page behemoth.

Remarkable stops on that journey? There were so many! Everywhere I went, I experienced time-honored grilling techniques and fascinating new ways to cook with live fire. Above all, I learned a lesson that still holds true today: that in the world of barbecue, there’s no such thing as strangers, just friends who haven’t met.

As I look back on The Barbecue! Bible, I see not only how much it changed my grilling, but the world’s.

Writing the book helped me organize a seemingly chaotic body of techniques, traditions, and superstitions into a coherent system, a “language” of barbecue, with its “vocabulary” (basic rubs, marinades, bastes, sauces, and condiments) and “grammar” (the five fundamental grilling techniques—direct grilling, indirect grilling, smoking, spit-roasting, and caveman grilling in the embers).

And if food seems to stick to the grate less than it did in our parents’ day, well, that’s because more and more Americans have adopted Raichlen’s rules for great grilling: “Keep it hot. Keep it clean. Keep it lubricated.” Steven in Greece about to eat the strangest dish on Planet Barbecue: kokoretzi — a sheep’s innards wrapped in small intestine and grilled on a spit!

And, yes, to the best of my knowledge, The Barbecue! Bible was the first book to chronicle beer can chicken! The Barbecue! Bible (the exclamation mark was also Peter Workman’s idea) became an international bestseller, and I, quite inadvertently, came to specialize in a field I never quite knew existed: global grilling.

My Public Television shows, like Primal Grill and Project Smoke and Project Fire (plus my French shows in Quebec and new Steven Raichlen Grills Italy show); the barbecuebible.com website, Barbecue University school at the Broadmoor, and my Best of Barbecue grilling accessories and Project Smoke barbecue rubs and sauces—all stemmed from that epiphany I had about grilling in November, 1994. Peter Workman, and my incredible editor, Suzanne Rafer, believed in the project. And here I am today.

One of the paradoxes of being a food writer is that you’re always developing new recipes for future books, rather than returning to old favorites. So as I pause to celebrate this momentous 20th anniversary, I remember some of my favorite dishes from The Barbecue! Bible. Here are my top 10 (although that list may very well change tomorrow):

I’ll be firing up my grill this month to make them. I hope you will, too! This anniversary celebration wouldn’t be complete without lifting the curtain on a few foibles and stumbling blocks we had in the process of bringing my gargantuan book into print.

It’s been an amazing ride, my friends, and in addition to thanking Workman Publishing and my incredible wife, Barbara, I’d like to thank you, dear readers, for making this amazing career in live fire cooking possible. So here’s a solemn promise: I’ll keep writing books to help all of us take our barbecuing and grilling to the next level for as long as I can.