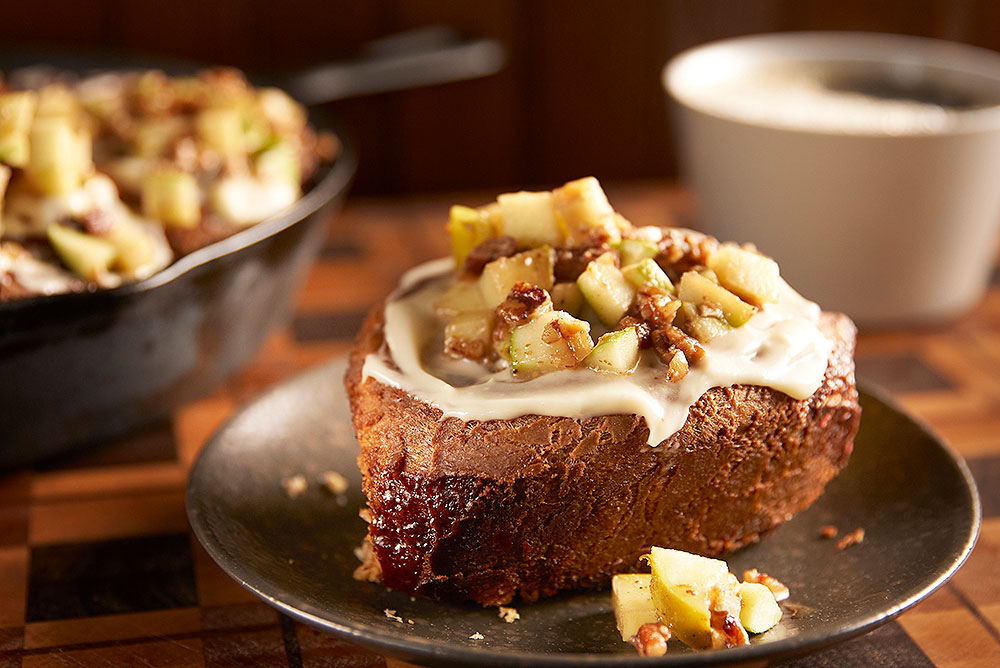 Other Recipes from Episode 403: The Breakfast Grill

For the dough (see Note below):

For the Maple Bourbon Frosting, for serving:

For the Apple Pecan Relish, for serving:

1: Make the dough (Note: You can use your favorite pre-made dough, if desired): Pour the warm milk in the bowl of a stand mixer and sprinkle the yeast on top. Add the eggs, butter, and sugar, then mix until combined. Add the salt and 4 cups of flour and mix (using the beater attachment) just until the ingredients are combined. Do not overmix. Allow the dough to rest for 5 minutes to allow the flour to soak up the liquids.

2: Scrape the dough off the beater blade and replace with a dough hook. Beat the dough on medium speed for 5 to 7 minutes, or until the dough is smooth and elastic. Add more flour if needed (up to 1/2 cup). The dough will be tacky and sticking somewhat to the sides of the bowl. Do not be tempted to add more flour.

3: Grease a large mixing bowl with butter or spray with cooking spray. Transfer the dough to the prepared bowl and cover with a clean cotton cloth or wax paper. Set the bowl in a warm place and let it rise until doubled in size.

4: Dust a pastry mat or countertop generously with flour. Turn the dough out onto the mat or counter and sprinkle with additional flour. Flour a rolling pin and roll the dough into a rectangle that’s about 14- by 10-inches.

5: Make the filling: While the dough is rising, prepare the cinnamon filling. Combine the softened butter, brown sugar, and cinnamon; mix until well-combined, then set aside.

6: Prepare the bacon: Mix the barbecue spice and maple sugar together; reserve 1 teaspoon for the frosting. Sprinkle the bacon slices with the spice and place the bacon on the grill or in a cast iron skillet on the stovetop or your grill’s side burner. Cook the bacon on both sides until it is partially cooked, but still pliant. Let cool slightly.

8: Brush a cast iron skillet with melted butter and arrange the cinnamon rolls in it. (Alternatively, use the same skillet you fried the bacon in.) Brush the tops of the rolls with any remaining melted butter.

9: Set up your grill for indirect grilling and heat to 350 degrees (medium). Place the cast iron skillet with the rolls on the grill grate and bake until browned and done in the center, about 20 minutes. Let cool slightly.

10: While the rolls bake, make the frosting: Combine the cream cheese and butter and mix until smooth. Add the remaining ingredients. If desired, smoke the icing with a handheld smoker according to the manufacturer’s instructions.

11: Make the relish: If desired, cook the apples slightly in the bacon grease. Let cool, then dice. Stir in the remaining ingredients.

12: Using the same skillet you cooked the bacon in, sauté the apple rings for a few minutes. (Leave the apple raw, however.) Dice, then add to a large mixing bowl. Stir in the remaining ingredients.

13: When cool, ice the rolls with the frosting. Serve with the relish.