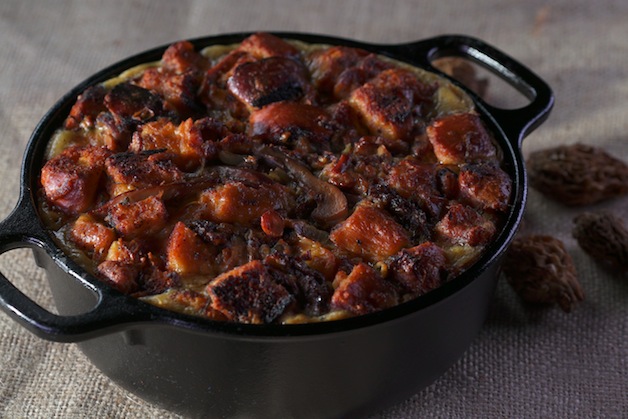 For the mushroom hash:

Step 1: Set up your grill for direct grilling and preheat to medium high. Grill the brioche slices until browned on both sides, 1 to 2 minutes per side. Let cool on a wire rack.

Step 3: Place the eggs in a large mixing bowl and beat until smooth. Beat in the half and half. Stir in the mushroom hash, followed by the bread cubes. Correct the seasoning, adding salt and pepper to taste: the mixture should be highly seasoned. Re-grease the skillet and spoon the pudding into it.

Step 4: Set up your grill for indirect grilling and preheat to 350 degrees. Add wood chips or chunks to the fire.

Step 5: Smoke-roast the pudding until browned on top and cooked through, about 45 minutes. To test for doneness, insert a metal skewer—it should come out clean.