Lobster Rolls with Kale and Hearts of Palm Slaw 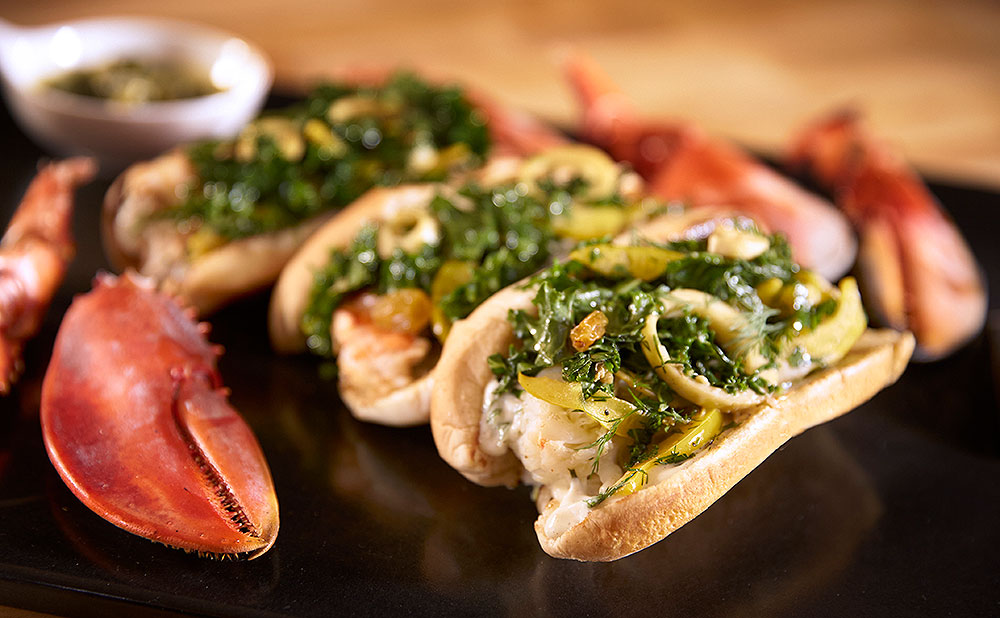 Other Recipes from Episode 402: Rolled, Stuffed, and Grilled

Lobster Rolls with Kale and Hearts of Palm Slaw

For the charred scallion and lemon mayonnaise:

For the herbed butter:

1: Make the charred scallion and lemon mayonnaise: Heat the grill to high. Brush or scrape the grill grate clean and oil it with vegetable oil. Arrange the lemon halves, cut sides down, on the grill grate. Lay the scallions at right angles to the bars so they don’t fall through. Grill for 3 to 4 minutes, or until nicely charred. Slice the scallions crosswise, discarding the furry stems. Add to the mayonnaise. Squeeze the juice from the charred lemon halves (start with two halves; you can always add more) and whisk into the mayonnaise. (If you have charred lemon halves left over, use them to garnish the lobster rolls or save for an outstanding vinaigrette.)

2: Make the kale slaw: Stem the kale and slice crosswise into thin slivers. Place in a large mixing bowl. Slice the hearts of palm crosswise into rounds, and add to the bowl with the kale. Stem, core, and seed the bell pepper and cut it into slivers. Add the bell pepper, raisins, and dill to the slaw. Drizzle with extra virgin olive oil and vinegar. Add salt and pepper. Taste, adding more olive oil, vinegar, or salt and pepper. (You want a well-balanced slaw.) Set aside.

3: Make the herb butter: Melt the butter in a cast iron skillet over your grill’s side burner or on the stovetop over medium heat. Add the scallion, tarragon leaves, and the lemongrass, if using, to the mixture. Cook until the herbs begin to sizzle. Keep warm.

4: Brush the cut sides of the buns with the herb butter and set aside.

5: Once again, brush or scrape your grill grate clean and oil it with vegetable oil. Maintain your grill’s high temperature by adding more fuel, if necessary.

7: While the grill is still hot, arrange the buns, cut sides down, on the grill grate. Grill for 1 to 2 minutes, or until golden brown. (Watch carefully.)

8: To assemble the lobster rolls, slather some of the mayonnaise on the cut sides of the buns. Top with some of the tail or claw meat, top with slaw, and serve.