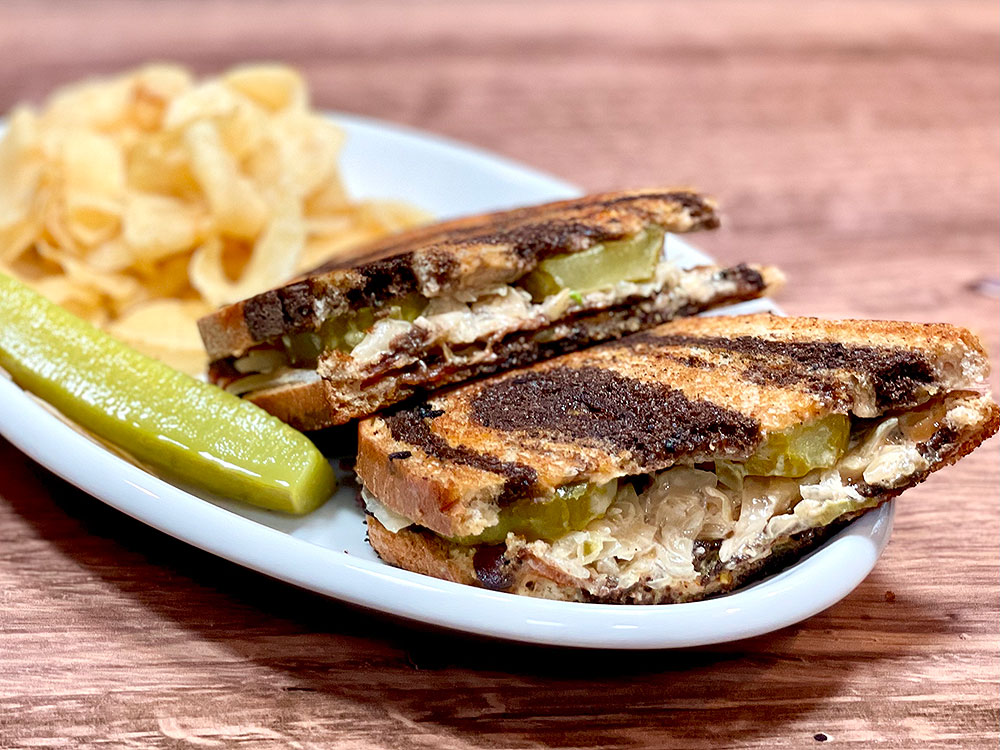 1: Butter the bread slices with 1 1/2 teaspoons of the butter. Place one slice buttered side down on a work surface. Spread the top with about 1 1/2 tablespoons of the dressing.

2: Place the slices of bacon in a single layer in a cold heavy large skillet and heat over medium heat. Cook the bacon until it is crisp and browned and most of the fat has melted out (rendered), about 6 minutes, turning the bacon over with tongs once the first side is browned (about 3 minutes). Transfer the bacon to a plate lined with paper towels to drain.

3: Arrange the bacon on top of the bread, followed by the cheese, sauerkraut, and dill pickles.

4: Spread the second slice of bread with the remaining 1 1/2 tablespoons of dressing. Place the bread, dressing side down and butter side up, on top of the pickles.

5: If you are cooking the sandwich in a skillet: Melt the remaining butter in a large cast iron or nonstick skillet over medium heat. Add the sandwich and place a grill press or second heavy skillet on top. Cook the sandwich until the bread is brown and crisp, the cheese is melted, and the pastrami bacon is hot, 2 to 3 minutes per side, carefully turning the sandwich over with a spatula. Reduce the heat as needed to keep the bread from browning too much before the cheese has melted.

6: If you are cooking the sandwich in a contact grill: Preheat the grill. When the grill is hot, place the sandwich in it and cook the sandwich until the bread is brown and crisp, the cheese is melted, and the pastrami bacon is hot, 4 to 6 minutes.

7: Cut the sandwich in half with a serrated knife and serve it at once.

Homemade Thousand Island-Style Dressing: Combine 2/3 cup mayonnaise, 1/4 cup chili sauce or ketchup, and 3 tablespoons sweet pickle relish in a small bowl and stir or whisk to mix. The dressing can be refrigerated, covered, for up to 1 week.