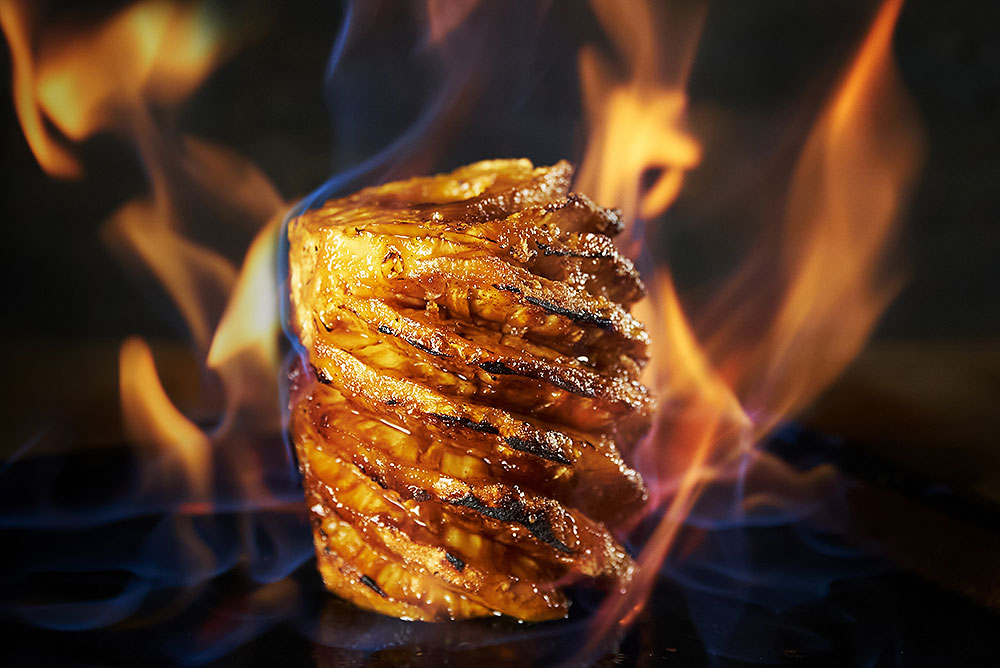 Other Recipes from Episode 311: The Improbable Grill

Direct Grill Method:
Set up your grill for direct grilling and heat it as hot as it will go. Brush or scrape the grill grate clean and oil it well. Arrange the molasses-brushed, sugar-dredged pineapple on the grill, long side running the same direction as the bars of the grate. Grill, turning with tongs, until the outside is sizzling and the sugar coating is browned and caramelized, 2 to 3 minutes per side, 8 to 12 minutes in all. Finish as described in Step 6.

1: Set up your grill for spit-roasting and heat it as hot as it will go. On a charcoal grill, rake the coals under the spit (not just in front and back as we usually do for rotisserie grilling). On a gas grill, light the burners under the spit as well as behind it.

2: Make the spiced sugar: Combine the sugar, cinnamon, allspice, and cloves in a pie plate or other shallow dish large enough to accommodate the pineapple, and mix well with your fingertips or a whisk.

3: Peel the pineapple, then turn it on its side. Remove the eyes by making V-shaped cuts on a diagonal on the sides of the pineapple. Core with a pineapple corer. Skewer it on the spit. The spit will pass right through the tunnel in the center. Use the prongs to hold the pineapple in place.

5: Spit-roast the pineapple until the outside is darkly browned, 8 to 12 minutes. The sugar should cook to a dark caramel crust. You’ll probably want to help it brown with a blowtorch or roofer’s torch. The idea is to sear the exterior while keeping the fruit cool and moist in the center.

6: Carefully unskewer the pineapple on a rimmed sheet pan and stand it upright on a round flameproof serving platter. Pour the 151-proof rum in the center where the core was. Light it with a long-stemmed match. Let it burn for a while (there’s your volcano), then cut the pineapple in 4 pieces, either crosswise or lengthwise. Serve in heatproof bowls with ice cream or whipped cream on the side if you like, spooning the now extinguished rum over the fruit.

Our thanks to the sponsors of Project Fire Season 3: