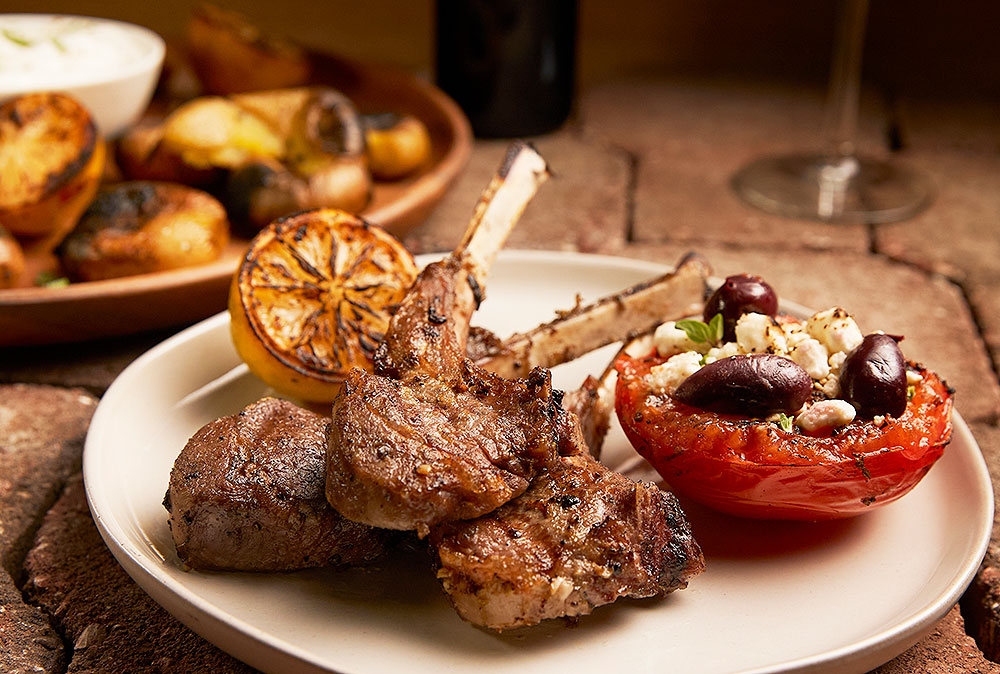 Other Recipes from Episode 410: The Mediterranean Grill

For the deconstructed Greek salad:

1: Make the marinade for the lamb chops: In a mixing bowl, combine the mustard and garlic. Whisk in the olive oil (about 1/4 to 1/3 cup) and about 1 1/2 teaspoons dried oregano. (Crush the oregano between your palms to release its fragrant oils.) Season with salt and pepper.

2: Pour a few spoonfuls of the marinade in the bottom of a glass baking dish. (Alternatively, marinate the chops in a resealable plastic bag.) Add the chops, then top with the remaining marinade. Turn the chops to coat. Set aside (or refrigerate) for 20 to 30 minutes.

3: In the meantime, set up your grill for grilling in the embers and heat to high.

4: Generously oil the potatoes and season with salt and pepper. Enclose in 2 foil packets in a single layer. Put the packets directly on the coals, turning once or twice with long-handled tongs.

5: When the potatoes are tender (a skewer should go through them easily), set them aside in their foil packets and keep warm.

6: Replace the grill grate. When it’s hot, brush or scrape it clean and oil it well with vegetable oil.

8: Grill the chops for 2 to 3 minutes per side, or until done to your liking. Transfer to a sheet pan topped with a wire rack and let rest for 2 to 3 minutes. In the meantime, remove the potatoes from the foil packets and use the palm of your hand to smash them on a cutting board. Season with salt and pepper. Transfer to a platter and serve with yogurt, if desired.

9: Arrange the lamb chops on the platter with the tomatoes and lemon halves. Top the tomatoes with the feta, kalamata olives, and chopped fresh oregano. Serve immediately.