Episode 306: Barbecue on a Budget 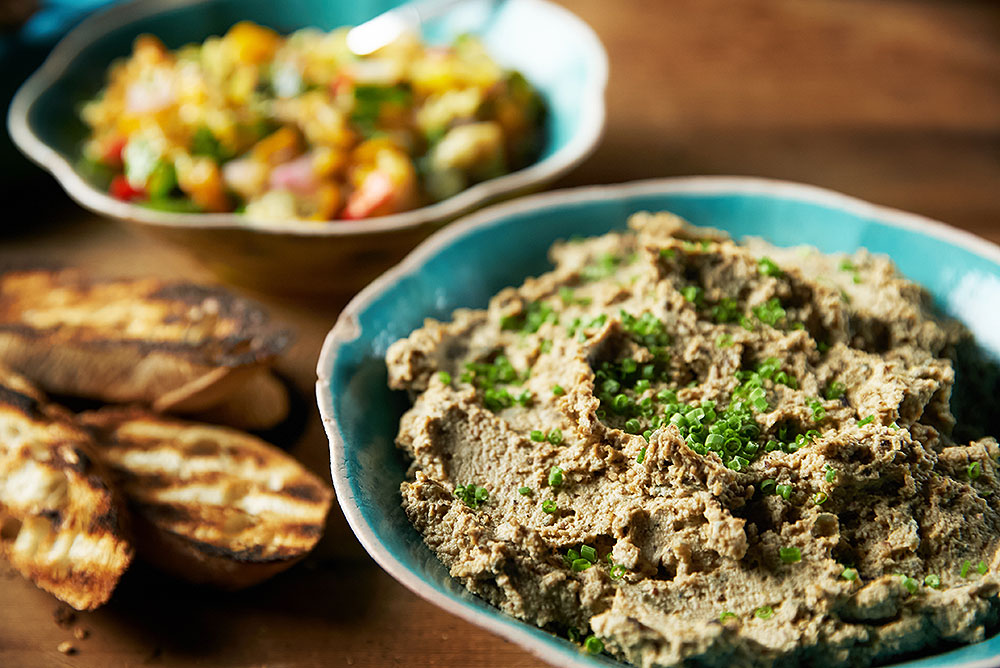 For the chopped liver:

For the ember-roasted vegetable dip:

1: Make the ember-roasted vegetable dip: Set up your grill for cavemanning—pour a chimney of coals directly into the bottom of your charcoal grill and spread them out evenly with a grill hoe or other implement.

2: Make a series of small slits in the eggplant and stuff each slit with a sliver of garlic.

3: Arrange the eggplant, bell peppers, shallots, hot peppers, and the poblano directly on the embers, turning with tongs as needed until the outsides are blackened and charred. (When it’s cooked through, you’ll be able to easily pierce the eggplant with a skewer or a sharp knife.) Let the vegetables cool.

5: In the meantime, make the chopped chicken liver dip: Using a grill hoe, set up your grill for indirect grilling/smoking by pushing the coals into two piles opposite each other with an aluminum drip pan separating them. Season the chicken livers with salt and pepper. Arrange the onion wedges, peeled hard-cooked eggs, and chicken livers in a second aluminum foil drip pan. Place the pan in the center of the grill. Add 2 hardwood chunks or 2 handfuls of soaked drained hardwood chips on the embers. Replace the grill lid, and smoke the chicken livers, eggs, and onion until the livers are slightly yielding (they will still be slightly pink in the center) and the eggs are bronzed with smoke.

6: Heat the 2 tablespoons of olive oil over medium heat in a cast iron skillet. Coarsely chop the onion wedges and add to the oil. Saute the onions until they are lightly browned.

7: Place the hard-cooked eggs, chicken livers, and onions in the bowl of a food processor and process until the ingredients are combined but still have some texture. Add salt and pepper to taste. Transfer the dip to a serving bowl. Top with the chives and serve with the grilled bread. Cover and chill if making ahead.

Our thanks to the sponsors of Project Fire Season 3: